Despite leaving earlier than anticipated, Doris Van Kappelhoff has always been considered an Angel.

Growing up in Cincinnati, she always thought she'd be a dancer. Born on April 3rd, 1924 in Evanston, Doris loved to dance as a young child, idolizing Ginger Rogers. It was in 1937, while a freshman at Our Lady of Angels High School, that Doris and her dance partner, Jerry Doherty, won a $500 prize in a local amateur dance contest sponsored by the Alms & Doepke department store. With hopes of finding stardom there, Doris and her dancing partner planned a trip to Hollywood, California, to determine their prospects as professional dancers. While in Hollywood, they also hoped to visit Franchon & Marco’s famous school of dance. However, the day before they were to depart, Doris went out with friends to dinner at a nearby restaurant. On the way back from the meal, the car in which Doris was riding was struck by a train. Her right leg was severely injured, dashing her dreams of a career as a dancer. Recovering from her injuries, she was bedridden for a year. She recuperated in her apartment over her Uncle's tavern, located on Warsaw Avenue in Price Hill. While there she had access to the jukebox, and the swing and contemporary music of the day. While singing along to these records, she developed a style of her own.

Still known as Doris Kappelhoff, she was approached by nightclub owner and bandleader Barney Rapp, who offered her a job singing at his local club, The Sign Of The Drum, for $25 a week. It was Rapp who suggested that Doris change her name. Due to the popularity of her radio performance of “Day After Day,” she somewhat reluctantly chose to capitalize on the association, selecting the name Doris Day. Soon after she left Our Lady of Angels to pursue her career a professional singer.

Her recording of "Sentimental Journey" in 1945 became the official anthem of service men coming home. Her song "Que Sera, Sera" became the song most associated with her. Despite a vocal career that consisted of more than 20 albums and numerous hits, it is her film and television career she is perhaps best known for.

Doris Day starred in over 30 films, including notable classics such as Love Me or Leave Me, The Man Who Knew Too Much, The Pajama Game, Pillow Talk, and That Touch of Mink. She also starred on The Doris Day show on CBS from 1967-1973.

Ms. Day received her star on the Hollywood Walk-of-Fame in 1960. 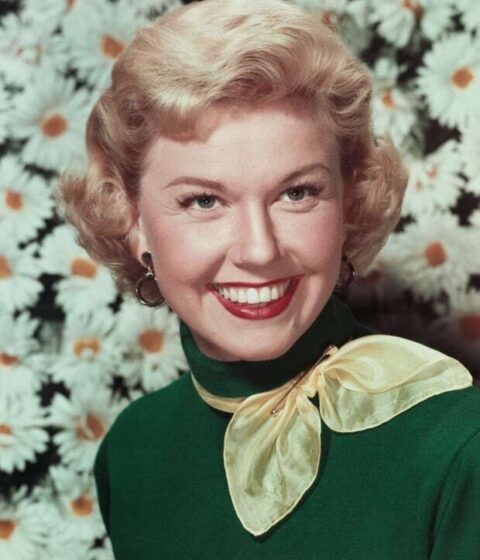