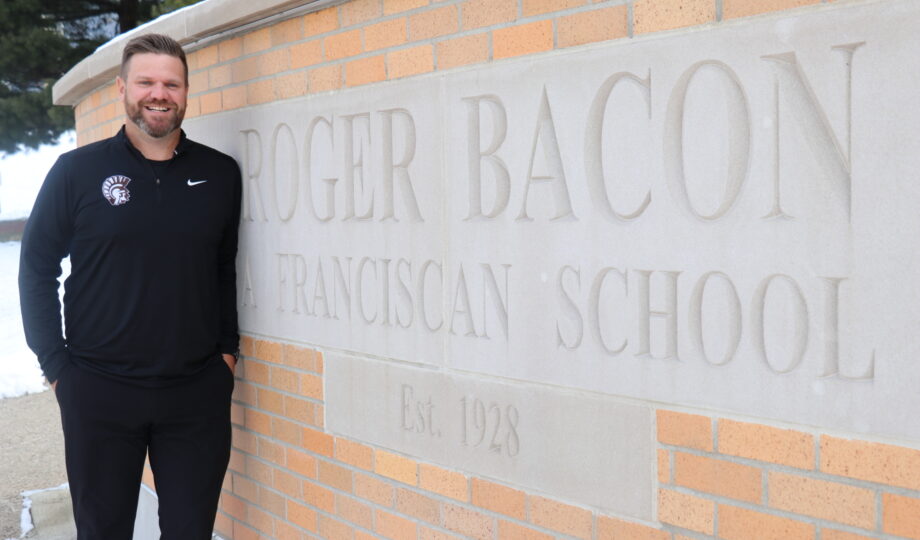 Roger Bacon High School is excited to announce the promotion of Tim McCoy ’02, the current Assistant Principal, to Principal for the 2023 – 2024 school year.

Prior to Roger Bacon, Tim spent five years as Superintendent of New Path Child & Family Solutions where he oversaw the educational programs for St. Joseph’s Orphanage across three K-12 campuses. Tim began his teaching career as an intervention specialist in the Mt. Healthy School District and has extensive experience as both a classroom teacher and administrator.

As a student at Roger Bacon, Tim was a multi-sport athlete and a member of the 2002 boys’ basketball state championship team. Tim attended Mount St. Joseph University, where he played baseball, and graduated in 2006. He received his Masters of Education in Administration from Xavier University in 2019. Since 2007, Tim has served as the Roger Bacon head baseball coach, leading the Spartans to two Final Four appearances since 2019.

Tim will replace Steve Schad, who has served as Principal since the 2011 – 2012 school year and was recently appointed as the next President of Roger Bacon. “I am thrilled that Tim will be the next Principal at Roger Bacon,” says Steve Schad. “He is a dynamic leader with a strong student-centered focus that fits in well with the culture of our school. His wealth of experience in the education field coupled with his involvement at Roger Bacon over the past two decades will serve him and our Spartan family well as we continue moving forward to greater things.”

When asked about becoming Principal, Tim states, “I am honored to be given the opportunity to continue the outstanding work that Mr. Schad accomplished as Principal of Roger Bacon High School. The commitment to excellence of the faculty, students, and community is unmatched. I have been blessed to spend 21 years of my life in this exceptional culture. Roger Bacon is a special place. My family and I could not be more excited to contribute to this incredible tradition.”

Tim and his wife Carly reside in Springfield Township and have two children, Parker (11) and Olivia (10).