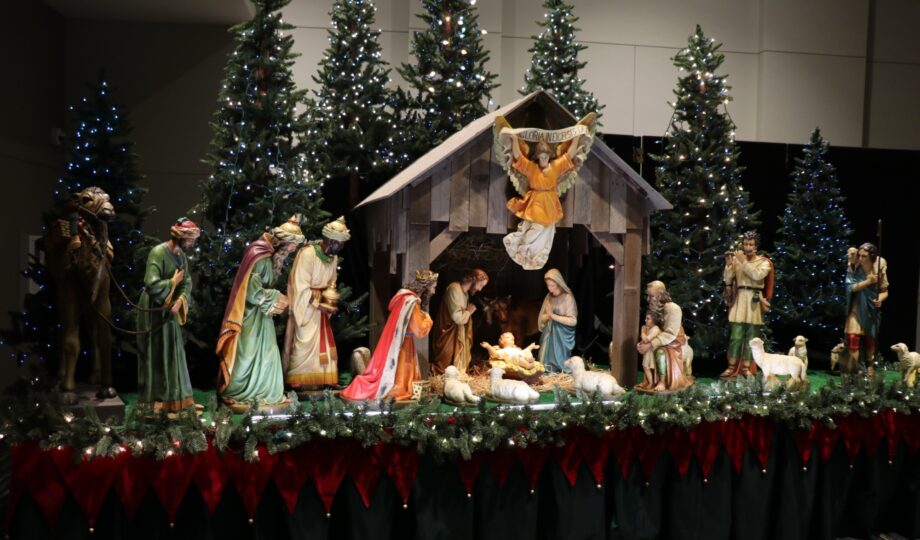 Roger Bacon's has returned it's historic nativity set to the Carol A. Dauwe Fine Arts Center for the Christmas season.

In the 1880’s, several Franciscan friars returned to Dusseldorf, Germany – the plaster capital of the world – to purchase four nativity sets (three large and one slightly smaller). These were purchased for Saint George (Cincinnati), Saint Anthony Shrine (Cincinnati), Saint Boniface (Louisville) and the smaller one for Saint Francis Seminary (Mount Healthy).

In late November 1989 the Archdiocese of Cincinnati began considering the possibility of merging three parishes (St. George, St. Monica in Fairview, and Holy Name in Mt. Auburn). The Cincinnati Post reported that the merger was due to the shortage of available priests within the Archdiocese. Archbishop Daniel Pilarczyk approved the merger in December 1989, with the proposed merger to happen by 1995. By 1991, it was decided that the merged parishes would be located in St. Monica. St. George had too many structural and repair problems. The last Sunday mass was celebrated on July 27, 1993, and the official merger began July 1, 1993.

With the closure of St. George parish, the nativity set (which was in a state of needed repair), was going to be disposed. Roger Bacon's own Bro. Gene Mayer, O.F.M., took possession of the set to preserve its history. In 1995, Bro. Gene, with the generous help of his mother, had the entire set refurbished. He has kept careful watch of the nativity set since, and with the dedication of the Dauwe Fine Arts Center at Roger Bacon, it has found a rightful Franciscan home.