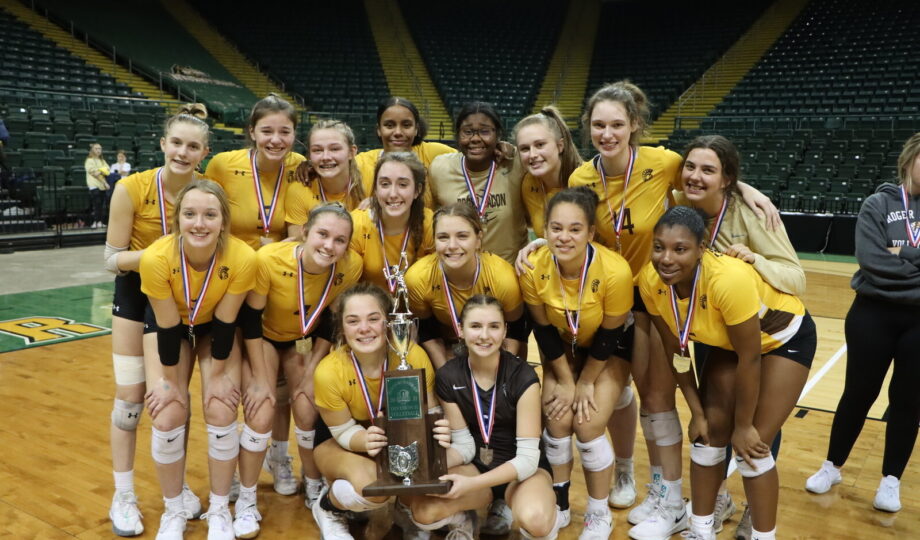 When Roger Bacon volleyball fell behind by two sets in Saturday’s Division II final, it looked like Gilmour was making quick work of the Spartans.

Those Spartans, however, refused to go away.

The girls fought back to win the next two sets and reach a fifth for the second consecutive match.

The match was the first state final appearance since 2005 for Roger Bacon (22-7) and its first runner-up finish since 2000.

“I’m so proud of these girls and what they did today, what they accomplished this season,” Roger Bacon coach Alyssa Flading said. “To be in the state championship and be down 0-2 and come back for a fifth set, that goes to show the guts and what these girls have in them, and I’m so proud.

“Our fight song says, ‘Spartan courage never yields whatever the outcome be,’ and they were Spartans today.”

Sophomore Kelsey Niesen came up big during the comeback effort, posting 19 kills, 16 digs, two aces, an assist and a block assist. Freshman Mariah Gaines had 12 kills and four total blocks, including a set-winning block in the third set and a winning kill in the fourth set.

The underclassmen provided a ton of contributions throughout the season for the Spartans. Niesen led the entire Miami Valley Conference in kills with 340. Gaines finished with 225, as the future looks bright for a Spartan side that is losing only four seniors from the roster. After erasing a two-set deficit to get to the brink of Roger Bacon’s first championship since 2005, the young Spartans looked as composed as a veteran group of players.

“They know they can do this, and so yeah, there may be a time where you’re down a few points, but you just have to keep digging in,” Flading said. “The game of volleyball is all about momentum shifts, and one point is just as important as another point, so if you can remember that in your head and get through, you can make big things happen like we nearly did today, and I still think what we did today was a big thing.”

Facing the Lancers (25-3) is a tall task for any team. The back-to-back champions had a roster that featured four 6-footers, led by 6-foot-1 senior Kathryn Randorf, who is committed to playing at Northwestern next season.

“(Randorf) is huge. She’s amazing. She’s so good, and we knew that going in,” Flading said. “Luckily, this week, the two teams we came across, Bishop Hartley and (Gilmour Academy), they were similar in the fact that they had a big middle.

“This team probably had a little more ball control and more people that were able to keep the ball in play, so we knew that coming in, it was going to be a little bit tougher, but we were able to prepare, and I think our girls did the best they could today.”

It will be the last high school match for Roger Bacon seniors Cammy Niesen, Sammi Hoffman, McKenzie Kroeger and Katie Gary-Perry. Cammy finished the match in a match-high 31 digs, while Hoffman led Roger Bacon with 38 assists. Kroeger had nine digs, a kill and two blocks.

For the seniors and even the rest of the team, they made sure to take in the moment on and off the court on the final day of a memorable season.

“It’s been an incredible experience,” Cammy said. “Getting to ride up here, we took a charter bus and vans and just listening to music and being with my team. It’s just been a fun ride.”

Since Roger Bacon has developed a successful tradition throughout the program’s history, where several of the players’ parents played for the program, playing for the team and reaching this moment brings a lot of old memories back for some of the players.

“Me and Cammy’s oldest sisters started here 11 years ago when it was Alyssa’s first team,” Hoffman said. “And since second grade, me and Cammy were practicing winning the state championship at recess, so to finally make it, it’s pretty special.”

In Kroeger’s case, she didn’t even know if she’d have a significant role on the team at the beginning of the season. She started on the bench at first, and in the state final, she played in all five of the team’s sets.

“I really didn’t think I was gonna be on this team and actually play because I started on the bench, but going in there and working with these girls, it’s really shown me, like, the friendships I’ve made,” Kroeger said. “I just love my teammates, and I know next year they’re going to come and they’re going to get state for us. They’re going to win for us.”

ARTICLE FROM CINCINNATI.COM BY NATE FIELDS: