Coach Brian Neal to Step Down After 2021-22 Basketball Season 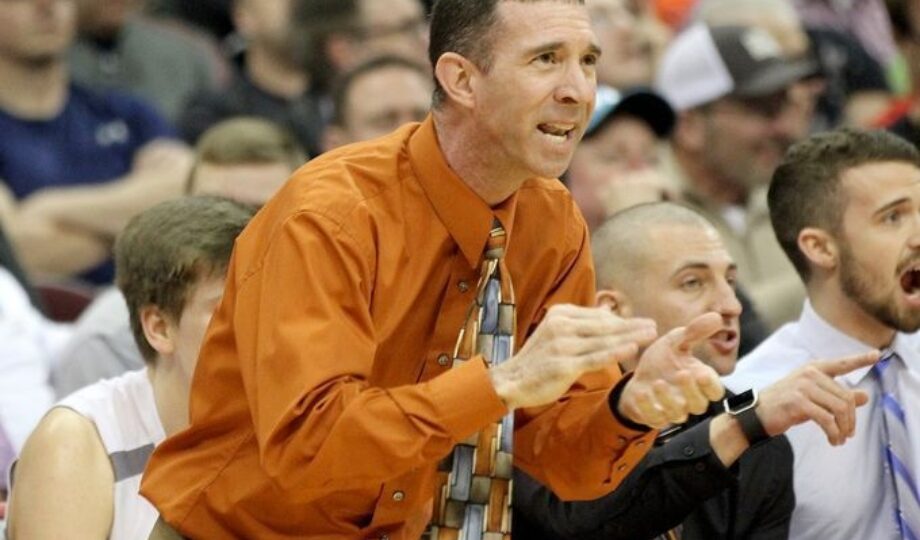 Roger Bacon High School boys basketball coach Brian Neal has decided that the 2021-22 season will be his last as head coach of the Spartans. He will step down at the conclusion of this, his 17th year. Coach Neal is the all-time winningest coach in Roger Bacon history with a 236 – 161 record.

During his previous 16 years as head coach, Coach Neal and the Spartans won eight (8) league championships, ten (10) sectional championships, three (3) regional championships (state Final Fours) including a state runner-up finish in 2017. Coach Neal was named the GCL Coach-of-the-Year eight out of nine seasons from 2009-2017 as the Spartans compiled a 181-59 record (.754 winning percentage). He was also named the Associated Press Division III Coach-of-the-Year in 2013.

The son of Roger Bacon’s iconic marching band and music director Wesley Neal, Brian grew up in the hallways of RB. He is a 1990 graduate of the school. As a student at Roger Bacon, Brian met his wife, Dr. Amy Neal ’93, and played basketball for Spartan legend Jim Rice. After beginning his post-college career in corporate America, Brian decided he wanted to follow in his father’s footsteps, becoming a math teacher, and returning to his alma mater to teach and coach.

His first stint as an assistant was with his former coach, Jim Rice. He worked for Jim for one year before Jim retired from coaching. He was then hired to work with the Roger Bacon Girls basketball program and head coach Tom Singleton. During the 1994 season the Lady Spartans finished state runner-up, and in 1995 put together one of the great seasons in Ohio history with a 28-0 record, claiming the state championship.

Coach Neal then moved back over to the boys’ side with head coach Bill Brewer, and was an assistant coach when the Spartans made history in 2002 by defeating LeBron James and St. Vincent-St. Mary to claim the state championship, handing LeBron his only defeat to an Ohio team during his four years of high school. The story of this season is recalled in the book The Chosen Ones by Tony Meale. It is a victory that is still remembered on a local and national level. When Bill Brewer stepped down in 2006 as Roger Bacon’s winningest coach with 170 victories, Coach Neal assumed the reigns. Sadly, Coach Brewer, who had moved on to coach at Princeton high school, passed away suddenly on November 2nd, 2007 at the age of 42.

On January 21st, 2016, Brian became the winningest coach in Roger Bacon history with a 69-28 win over Bishop Fenwick. Bill Brewer’s family was present to take part in the post-game celebration. As Coach Neal noted after this victory, “Most of the things I’ve learned in the basketball world I have learned from two guys, and Bill was probably the most influential. I would say one of the most influential after my father, who was a teacher and coach for 42 years. Obviously, a lot of my success was just growing up and watching what (my father) did.”

This season will be particularly special for Coach Neal and his wife as their son, Andrew, is a senior guard for the Spartans. Their daughter, Libby, is a freshman at Roger Bacon.

This season will also mark the 20th anniversary of the 2002 state championship victory over LeBron James and St. Vincent – St. Mary. Commemorations are planned at Roger Bacon during the 2021-22 season, with a special to air on ESPN this March.

“I have been a part of the Roger Bacon high school basketball program every day since I was 14. I am now almost 50. In that time I have grown from being a student, to an alum, to a coach and a teacher. The sideline at Fogarty Center has been my home away from home since 1991. It is where I have been able to watch hundreds of young student-athletes mature into leaders, forge friendship bonds that will last a lifetime, and learn the sacrifices it takes to fulfill their potential. They have my unending respect for pouring themselves out for their teammates and their school, and my eternal gratitude for giving me the ride of my life, and while I have been incredibly blessed to be the head coach of a successful program, any success attached to my name is only possible because of the dedication of the players and coaches I have been blessed to work with” says Neal.

Coach Neal plans to continue his roles as chair of the mathematics department and teacher at Roger Bacon. According to Neal, “Next season, I will get to do something I haven’t been able to do for the last 30 years – sit in the bleachers and cheer.”

Roger Bacon opens its inaugural season as a member of the Miami Valley Conference with a non-conference game against Hughes on Friday, November 26th.