Zach Kuhlman ’19 is inevitably one of our truest “Faces of RB.” He recently received his Service Academy Nomination to the U.S. Naval Academy in Annapolis, Maryland from Congressman Steve Chabot, where he is already signed to play college football. The Navy wasn’t always an option and it wasn’t until this past year when they began recruiting him for football when he sparked an interest. Last spring, around April, the Navy began showing interest in him and on May 9th, Zach’s Birthday, they offered him a scholarship to play Division 1 College Football. He went on a visit in November and instantly fell in love with the campus and the people. He realized that it was a place full of discipline and all around great people, which is exactly the type of person Zach strives to be. He was willing to rise to the standard and put the work in to play football at the next level and decided that Navy was going to be the best fit for him. “I always wanted to be a part of something bigger than myself and the Navy is just that.”

There is more to the picture than just playing football. A nomination to a Service Academy takes a lot of work and dedication. It is a very competitive process that requires four separate applications for nominations: 1 Representative in the House, 2 Senators, and 1 Vice President. He also had to go through two extensive interviews. On Friday, March 15, Zach was nominated by Congressman Steve Chabot for the Naval Academy. Although he has received his Letter of Assurance and already signed his letter of intent to play football, the only thing stopping it from becoming completely official is paperwork and his medical information to be cleared.

He is set to leave for Maryland on June 26 to start his college football career and will miss his mom, family and friends the most. It makes it a little easier with how supportive his mom is of him. Zach said that she will make plenty of trips to visit and watch his games once they begin. Not only is his time in Cincinnati ending shortly, but his time here at Roger Bacon as a Spartan is too. He will certainly miss the Friday Night Lights at Bron Bacevich Stadium the most. He has learned so much along the way these past 4 years, but one of the most valuable lessons he has learned is to always value friendships. “Kairos has taught me to never judge a book by its cover. You never know what someone is going through, even after going to school with them every day the past 4 years.” This is definitely a lesson that he will take with him to college and value every day.

Although he doesn’t have to officially declare his major until his sophomore year, he is leaning towards studying Economics. Some advice he would give to current student-athletes looking to further their athletic career in college is to take the time and make sure it is really something that you want. Stick to your decision and work hard to achieve whatever it is you want to do, just like Zach did. Mr. Tom Hertlein, Guidance Counselor, states that, "Zach has the work ethic to be successful in all facets of his life." We are proud of all that he has achieved, whether it be on the football field or in academics and know that without a doubt, his future holds success! 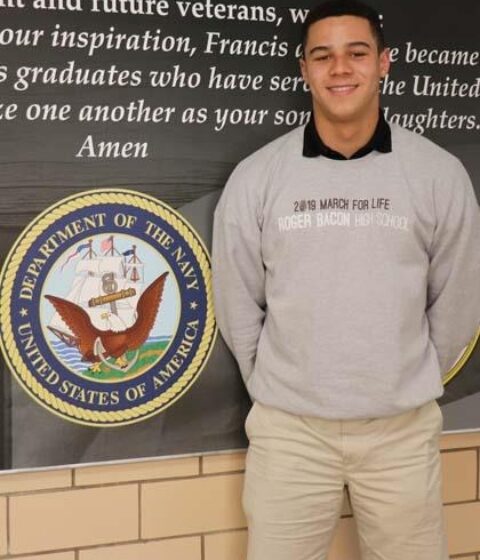 “Zach exemplifies all of the positive characteristics that represents a Roger Bacon student. He has the necessary qualities to have a positive and lasting impact on all those he meets. Zach truly demonstrates the hallmarks of a true leader grounded in compassion for others. He is able to set goals and create a plan to achieve them. He is an individual that the entire Roger Bacon community truly respects and admires.”