Disciplined, without a doubt was the easiest one for Sam to pick. Sam, a graduate of John Paul II, has been that way as long as he can remember. "I just keep working, I cannot give up on any of it," is how Sam describes life when it becomes overwhelming. As a senior, who is involved in every aspect of the school, Sam does not have time to think about all the work he has -- he has to complete it. Sam is currently a member of the National Honor Society, an Assisi Scholar, a member of the Community Outreach Board, Vice-President of Student Senate, a tutor at the Friars Club, Senior Leader and is a well accomplished athlete. Sam was one of the team captains for the 2016 Regional Runner-Up Boys Soccer team and a two-time State Championship runner in the mile run. Sam plans to head back to State this year. "All the schools I am looking at (Purdue, Ohio State, University of Cincinnati and Rose-Hulman) have offered me the opportunity to walk-on and run on their team. I need to get my time down from a 4:22 to 4:15, which would set me up for success at the State finals as well." Sam is ready to rise to the challenge, and talks about all of this with a smile on his face.

A person who is joyful is not only happy, but is able to spread that happiness to those around them. Even though Sam is a serious and quiet guy, he is able to bring a lightheartedness to any situation. According to one of his favorite teachers, Ms. Moore, "Sam is an amazing person with a huge heart and great jokes." His huge heart can be seen with his involvement in Community Outreach. Sam has been an Assist-a-Family rep, a Student Ambassador, a tutor and was involved with the mission trip to New Orleans. Ms. Moore continues, " I have witnessed his willingness to help others in the classroom and on the service trip to New Orleans. Sam is a joy to have in class and Roger Bacon is blessed to have him as a member of the student body."Roger Bacon is lucky to have Sam. As an 8th grader Sam was set on St. Xavier until his shadow experience. "I had a great day on my shadow visit. It was fun, warm and I could see myself being here.”

Sam has had the ability to stand out academically; he is currently the top student in his class, and he did not get here without a lot of hard work. "All our honors classes are small. I have had the opportunity to bond with my classmates. They are some of my best friends, the trip to Assisi was very much deserved and so much fun with this group!" Sam was actually nominated by his best friend, Noah Nixon, who he met in Communications class freshman year. "I did not know Noah until freshman year. I'm pretty sure we were comparing scores on something and the rest was history." Well, Noah has nothing but good things to say about his friend, Sam, "He is a kind hearted, funny, intelligent, and athletic student. He is dedicated to not only bettering himself, but also bettering all those around him." When picking those Franciscan values, it seems that Sam covered what many people around him see and Mr. Monahan recognizes this as well, "Sam epitomizes many of the Franciscan values that Roger Bacon holds dear. Through his academics, service, leadership, and sportsmanship, he is a great representative of this school." 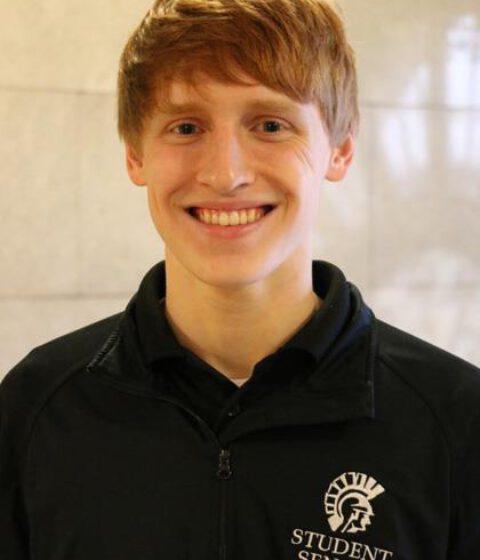 “I just keep working, I cannot give up…”