Few students have been part of the Roger Bacon family as long as Ryan Blaut ‘20. As a son, brother, and cousin of many RB alumni, Ryan has grown up as a Spartan. His dad, Mike Blaut ‘88, began coaching football at Roger Bacon when Ryan was in first grade. Ryan fondly remembers attending football practices and games as a kid. “My brother (Jake ‘16) and I would come down and play on the field during practices,” Ryan said. “As I got older, maybe in 5th or 6th grade, my classmates from John Paul II would come to football games with me, and we had a great time just hanging out and spending time at Roger Bacon.”

Now, as a senior football player and Senior Leader, Ryan says that being RB student has been everything he imagined and more. Throughout his time at Roger Bacon, Ryan has been a standout football player, earning 1st Team MVC, Southwest Region, and Ohio honors as a Defensive Back. He has also played baseball, competed on Academic Team, and volunteered as a peer tutor. Reflecting on his high school experience, Ryan said, “Coming to Roger Bacon is something I have looked forward to my whole life. I’m kind of a quiet guy - I don’t always express how happy I am to be at school, but I truly love coming to Roger Bacon every single day. I love the family environment and atmosphere here. It really is the place where I feel most happy and most at home.”

For Ryan, many teachers have had a positive impact on his experience at Roger Bacon. Two who have been especially significant are Mr. Kyle Monahan and Mrs. Annie Karle. “Mrs. Karle always saw my potential in English,” Ryan said. “Even when I was not motivated to work my hardest, she always pushed me to do my best because she knew I could. That meant a lot to me and helped me prioritize academics, even when I didn’t necessarily want to.”

Ryan’s teachers and coaches speak highly of his integrity and quiet leadership. Theology teacher Kate Romolo said, “When I think of Ryan, I think of the unsung hero. He understands the concept of teamwork on a deep and mature level. He is always willing to do what is best for the team, be it on the football field, in a class project, as a senior leader and as a friend. He never seeks fame or recognition. He is fiercely loyal and someone who can always be counted on. His love for Roger Bacon is something we should all wish in our hearts. I will dearly miss him next year, but he already knows that this is always his family.”

Next year, Ryan plans to attend Thomas More University, where he will study biology and continue to play football. “Last year, a biostatistician came to Roger Bacon on career day, and I really found her job interesting,” Ryan explained. “I job shadowed her this year. Biostatisticians work as a go-between for pharmaceutical companies and the FDA, they help drug companies carry out studies and organize their data. I like science and think it would be a career where I could use my interests in a cool and relevant way.” Even as he prepares to graduate and move on from Roger Bacon, Ryan knows that he will always be a Spartan. Roger Bacon will always be a place he calls home.

Roger Bacon is made up of many faces, different faces. We hope to showcase as wide a range of our Spartans as possible. If you would like to nominate a Spartan, past or present, to be featured as a Face of RB, please click here. 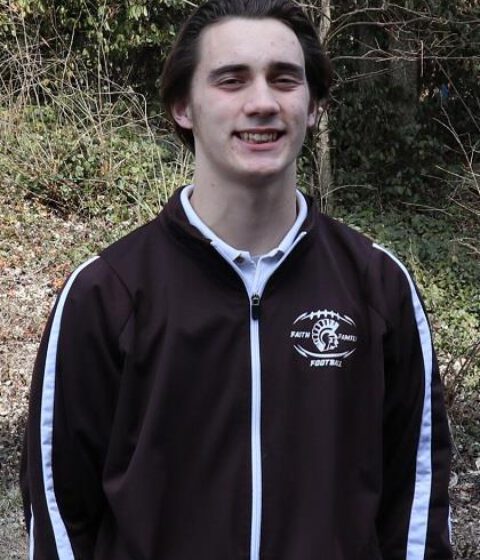 “I don’t always express how happy I am to be at school, but I truly love coming to Roger Bacon every single day. I love the family environment and atmosphere here. It really is the place where I feel most happy and most at home.”