Unlike many of her classmates at Roger Bacon, senior Rory Murphy didn’t choose to be a Spartan after completing her eighth grade year at Nativity. In fact, she didn’t even look at Roger Bacon. “My older siblings both went to another school, so I just kind of assumed I followed them, and then did just that,” says Rory. It wasn’t until her junior year began that she felt compelled to make a switch, and Roger Bacon was the obvious choice. “I just felt I needed to make a change,” shares Rory, “and Roger Bacon was a school I was familiar with, because our swim coach at my other school was the same as at Roger Bacon, so I already knew a lot of the girls from practices. I wanted a co-ed school with strong academics and Roger Bacon had that, and always seemed like it was a real family environment.”

As mid-year transfer making the switch in January of 2020, Rory didn’t have a lot of time to get acclimated to her new school. Just a few months into her new beginning, students were sent home due to COVID-19 and the mandated quarantine. “I thought I adjusted well, and everyone was so welcoming and friendly, then all of a sudden I was at home. It made my senior year almost like starting over. There were still classes I needed to find, teachers I had not met or seen before, students I didn’t know. I didn’t even know where my parking spot was,” says Rory.

Despite the stress the transfer and COVID-19 protocols presented, Rory has excelled at Roger Bacon. She is a member of the National Honor Society, tutors fellow students, and is a standout member of the swim team. This season Rory and fellow senior Natalie Borgert were named to the 2020-21 Academic All-American team by the National Interscholastic Swim Coaches Association, an honor only 2% of all swimmers nationwide earn. Rory also likes to devote time to the service opportunities Roger Bacon presents. Outside of school Rory maintains a competitive swim schedule, swimming for the Blue Ash Swim Club, and plans to work as a lifeguard this summer.

As her senior year winds down, Rory is looking forward to the experiences of being a graduate and the slow return to normal from the pandemic. This includes participating in the end-of-year ceremonies, masses, and of course, becoming an official graduate of Roger Bacon. “It just feels like it means more here than if I had stayed at my other school. I not only know that I excelled at a place with tough academics, but that I also made friends I will have the rest of my life,” shares Rory.

Rory is looking forward to her post-graduation plans of studying marketing and international business at Ohio State University. She previously considered Miami University, but recently made the switch. “My older siblings went to Miami, and I thought about following them, like I did for high school. I just decided last week that I wanted something different, just like I did when I transferred to Roger Bacon,” says Rory, “and since I like math, and I want to travel after college, business seemed like the right choice for a major.”

As for Rory’s words of wisdom for those eighth graders or potential transfer students looking at Roger Bacon, Rory says, “I highly recommend Roger Bacon. It is a close-knit environment, and it is so easy to have a relationship with your teachers and to make friends. It is easy to be yourself. I love Roger Bacon!” 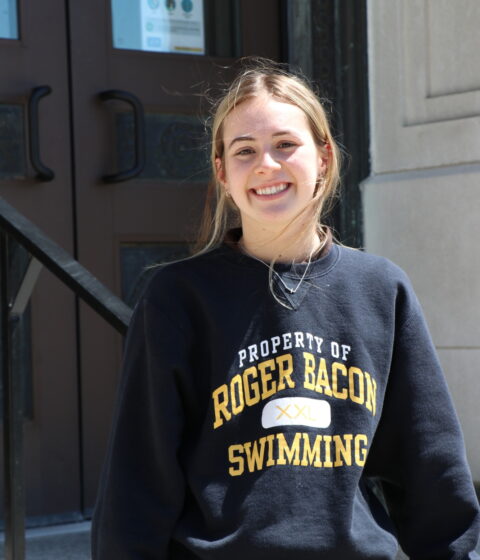 “Rory is an incredibly talented, thoughtful, and hard-working young woman. She has been such a pleasure to have in class and I certainly will miss her when she graduates this year. I am beyond proud of Rory’s accomplishments and I am confident she will continue to excel in her future endeavors.”