Senior Dakarai Edwards’ path to Roger Bacon was not a typical one. As an eighth grader at St. Gabriel, Dakarai initially made the decision to attend an all-boys school, and spent his first two years of high school there before deciding he needed a better fit. “I decided I needed to not only move to a smaller school, but I needed more diversity. I also needed more opportunity, and I thought the smaller school environment would provide that academically and athletically. I knew some friends from St. Gabe that were here, and they just loved it. They said it was like being in a close family, and they were right,” says Dakarai.

While entering a new high school as a junior might seem daunting, the close family feel of Roger Bacon made the transition an easy one, living up to Dakarai’s lofty expectations. Shares Dakarai, “As a junior transfer student, the entire student body and teachers at Roger Bacon welcomed me with open arms and immediately made me feel as though I belonged. I was able to increase my circle of lifelong friends, and become really involved in school activities. I played football, became a student leader, as well as a retreat leader. The academics are amazing and top-notch, and I grow spiritually each day.”

Dakarai is an honor roll student at Roger Bacon, who notes Ms. Annie Karle ’06 as one of his favorite teachers, stating, “I just love how much fun Ms. Karle has teaching. You can tell she loves teaching and being around us, which makes you feel good and makes class fun.” In addition to his hard work in the classroom, Dakarai stays busy at Roger Bacon. He was a member of back-to-back playoff teams on the football field, including a state Final Four run in 2020. Dakarai is also a senior leader and is involved in many of the service opportunities Roger Bacon provides. However, one of his favorite activities is serving as a leader for the junior JOY retreats. It is activities like this that have helped him build valuable friendships. “I love the relationships I get to build with people I might not otherwise get to meet, and Roger Bacon gives me that opportunity. I like that I have so many different friend groups, not just football, not just seniors, but friends that transcend activities and classes,” says Dakarai.

Outside of school Dakarai likes to play basketball as well as doing “praise dance” at his church. Dakarai was also one of the highlights to last year’s Christmas assembly, as he and junior Zach Meister gave a rousing rendition of “Let it Go” from the movie FROZEN.

As his senior year winds down, Dakarai has set his plans for life after RB. Despite numerous opportunities to continue his athletic career in college, Dakarai has decided to focus on his studies, and will attend Miami University next year, majoring in sports marketing. “I just think it would be fun to have a job that doesn’t feel like a job,” shares Dakarai, “And yes, I would love to maybe come back to work at Roger Bacon someday. I can’t imagine a better place to be”

As for his advice to those students who are looking to find the right fit for them? “I recommend Roger Bacon because it is a small school that comes with big opportunities. It feels like a close family here,” says Dakarai. “Coming to Roger Bacon was one of the best decisions of my life. I really feel prepared for the next phase of my life. Roger Bacon will forever be a part of me.” 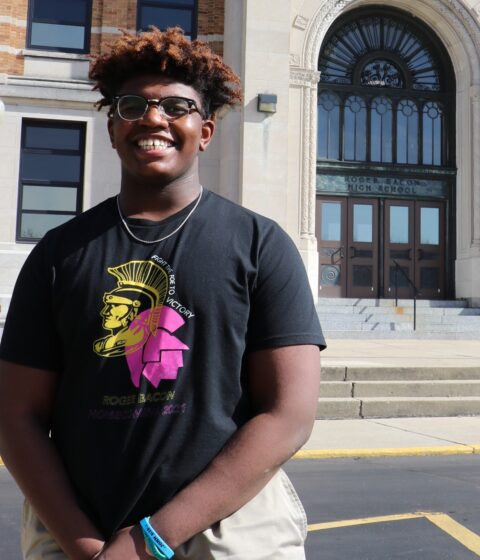 “Dakarai is one of those all-around amazing kids. He’s kind, respectful, hardworking, outgoing, and curious. And he’s funny!! His dance moves are unprecedented. I don’t have Dakarai this semester, but he never hesitates to wave to me in the hallway and share that wonderful smile of his. We are better here at RB because he is here! I’m so proud that he’s part of our Spartan family.”