Our newest Face of RB, Ben ’18, had the pleasure of going to Assisi and Rome in September on the Assisi Scholars Pilgrimage. “Seeing the original San Damiano cross was incredible. Having the opportunity to spend time with all my classmates in a different setting and on a spiritual journey was truly the highlight of my high school career.” The trip to Assisi included time to reflect and experience God, through the spirit of St. Francis and St. Clare. Being Franciscan has taught Ben many things, but he feels he has matured over the last four years thanks to the 16 values the school emphasizes. “I like how each quarter, we incorporate a Franciscan value into our everyday life. I feel like I most identify with ‘contemplation.’ Sometimes it is hard to put the time aside to contemplate on the experiences I have had, not only at Roger Bacon, but in my life and how they made me who I am. It is important to reflect and I’m glad the Franciscans also see this as a significant aspect of life.”

Ben is a very busy person, not only is he an Assisi Scholar, he is a member of the National Honor Society, God Squad, Campus Ministry, Academic Team, and the baseball and golf programs at school. Ben also spends a good deal of time hitting the links as a caddy at Clovernook Country Club. Ben is hoping to be interviewed for the Evans Scholarship, “My parents pushed me to caddy when I was younger, and I am glad they did.” The Evans Scholarship is a four-year, full tuition scholarship to either Miami University or the Ohio State University. In a perfect world, Ben would receive the Evans Scholarship and attend OSU to study aerospace engineering. “I’ve always liked math and science. The classes here (at Roger Bacon) have confirmed that. Over the years I have been on many field trips to Wright Patterson Air Force Base and I think that working at NASA would be a dream job."

Ben’s twin sister, Bridget, has also had the opportunity to be the Face of RB. “I am happy that I was chosen to be the next Face of RB. Bridget and the other Faces of RB are good people, and to be in that company is really cool.” Ben says that Bridget works really hard and that he thinks she is a great representation of the Roger Bacon community. Ben’s classmate, John Gruter ’18, nominated Ben because he sees the same things in Ben that Ben sees in his sister, “Ben Woeste should be the next Face of RB. He works very hard in his classes and is extremely involved. He is a shining example for our school, and I think that he would make a great Face of RB.” Ben’s response to John’s nomination was truly heart-felt, “The fact that John nominated me shows the bonds people make at RB. I didn’t know him until I started here freshman year -- I have made great friendships over the course of these four years. It also shows a different side of John, I appreciate that he recognizes my hard work and it says a lot about him as a person to take the time out of his day to nominate me. For that, I am very grateful.”

Roger Bacon is full of students like Ben, Bridget and John. They recognize each other for their hard work and their differences. Ms. Moore had nothing but positive things to say about Ben too, “Ben is a wonderful young man who exhibits the Franciscan values. As the Captain of the Varsity Academic team he provides fantastic servant leadership, serves others by always volunteering to give his peers rides, and accepts and teaches all the new team members how to play. He is a joy to have in class because he shares his incredible knowledge in a humble way." 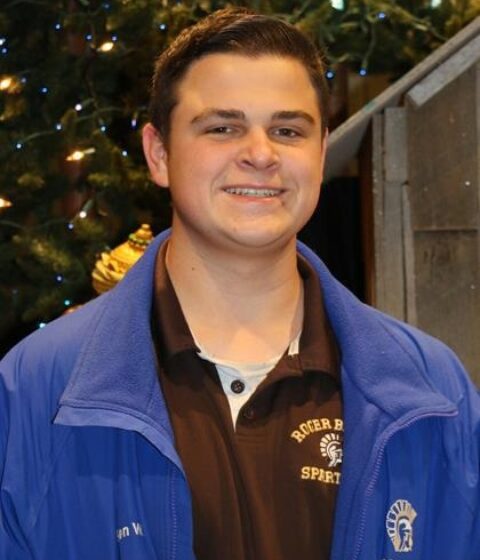 “Roger Bacon is blessed to have him as a student.”