A repeat of swimming at the State level for Ben ’18 has been the most memorable experience of his high school career. “The chance to go to state, not only once but twice, and being in the Top 16 is definitely the highlight of high school. The atmosphere is incredible. You are in a completely crowded natatorium and with the best competition in state, it is just such an exhilarating environment.” When asked to report all of his accomplishments in the pool, Ben told us the bare minimum, “I went to State, placed 15th in the 100 Fly and 11th in the 100 Breaststroke. Last year at State I placed 16th in the 200IM.” Upon further research, more accomplishments were found for the humble Ben. Ben has lowered the school record three times, was All-Ohio in Butterfly and two times All-Ohio in Breaststroke. He was also named to 2nd Team All-GCL and most recently, was named the Cincinnati Enquirer’s Heart and Hustle Athlete of the Week. Click here to read the article published about Ben on Cincinnati.com.

When he isn’t in the pool improving his technique and helping his teammates, Ben is in the chair as a lifeguard. According to Ben, it just made sense to become a lifeguard at the Powell Crosley YMCA, where he has trained since he was seven years old. His love for the pool has opened doors for Ben. He has swam at the National level three times, which means he has qualified and placed in the Top 50 in the nation. His dedication has also provided athletic scholarship offers to Western Illinois University and Bloomsburg University in Pennsylvania. “I’m still deciding where I want to go next year. I know that I want to major in Exercise Science. Being an athlete, I want to learn more about how the body works and what limits it can be pushed to.”

Even though swimming is his main focus, Ben is involved in other aspects of the Roger Bacon community. He has played soccer for four years, is a Senior Leader and was appointed as a Kairos Leader for K67. “Being a retreatant on K66, I was not sure what to expect. Our leaders were graduates from last year and I really feel like I took something away from their experiences they shared on Kairos. I felt like I wanted to do the same for my classmates. Seeing the way they were surprised and how they reacted to certain activities was my favorite part of being a student leader.” His friends and classmates are not surprised by Ben’s enthusiasm to share his experience with his peers. His long-time teammate and friend Sophie ’18 says, “Ben is always there for people and he knows how to put a smile on your face when you're upset. He's an all-around great person and he's going to go so far in life.”

The three adjectives Ben used to describe himself were: dedicated, funny and outgoing. Ms. Brizzi’s thoughts echo Ben’s introspection, “Ben has the important quality of understanding ‘time and place.’ He knows when it is appropriate to be fun-loving and goofy. On the other hand, he knows when to buckle down and take notes or work on an assignment.” Ben feels like he most relates to the Franciscan value of ‘Discipline’ because of his dedication to his sport and academics. Roger Bacon has taught Ben how to step up and be a leader. Most importantly, Ben says he will walk away from Roger Bacon knowing to do the right thing – even if it isn’t what others are doing. Doc Wittekind feels that Ben is a great choice for the Face of RB because, “Ben is an all-around great young man, a fine student, and an excellent athlete – he truly embodies our Roger Bacon motto of “In Sanctitate et Doctrina” – “In Holiness and Learning.” 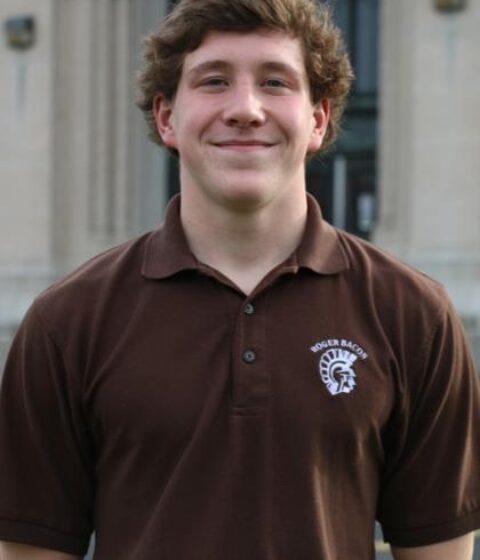 “One thing that I learned about him is that he always works hard and tries his best in everything that he does. I am very proud of Ben that he has accomplished something not very many people do, that just shows how hard he works towards his goals.”