Everyone who has been around Roger Bacon the past four years knows Kellen, Riley, and Alaina Finan. The Class of 2022 triplets have made their presence well known over their time at RB with their many activities and accomplishments at Roger Bacon. The trio hail from St. Michael in Sharonville. Despite being triplets, each was free to choose the high school of their choice, and chose Roger Bacon for their own reasons.

“I was the first to pick Roger Bacon,” says Kellen. “I knew immediately this was the school for me because of how close everyone is with each other. When I shadowed, I could see the relationship each student had with their teachers, and I just felt the most comfortable here. I like how small it is because everyone knows each other, and each teacher makes a point to get to know every student. As a result, I have teachers that I can talk to about more than just school. Teachers that say ‘Hi’ to me with a smile in the hallways.”

For Alaina, “I chose Roger Bacon because I wanted a co-ed school. The other schools I looked at were all-girls, so RB stood out, and is more like the real world. I was also familiar with the school as my older sister went here (Renee ’17) so I already knew how welcoming the environment was. What I love most is that RB is also a small school, and it really feels like a family. I can get to know almost everyone I see in the hallways.”

Riley was perhaps the closest to picking another school, but in the end was swayed to join her siblings at Roger Bacon. “I loved the Fine Arts Program here, and the sense of community. I also received the Fine Arts Scholarship award as an incoming freshman, which helped my decision!”

Kelly, Alaina, and Riley have made the most of their time at Roger Bacon, especially with their academics. All three are members of the Assisi Scholar Program and the National Honor Society, and all three are ranked in the top 20 in their senior class. They will join their fellow Assisi Scholars on a pilgrimage to Assisi and Rome in April, walking in the footsteps of St. Francis and St. Clare. Of course, when asked about their favorite teachers at RB, they each had different answers.

“Mine would have to be Doc (Wittekind). Who doesn’t love Doc?” says Alaina.

“Mrs. Meyer,” shares Kellen. “I had her for honors physics junior year, and she made that class really enjoyable for me. She is super nice, and very personable, and made a challenging class easier with her great teaching skills!”

Kellen was a four year soccer player and served as captain for his senior season. He also is involved in Ultimate Frisbee and Bacon Buddies. Alaina has been a standout swimmer all four years, serving as captain her senior year. Alaina was also one of two Roger Bacon students named an Academic All-American by NISCA, and is also part of the Ultimate Frisbee team. Riley swam for grades 9-11, and has been very active in Roger Bacon’s Fine Arts Program, building an impressive portfolio of work, and earning an “artist-of-the-week” honor for her efforts. Riley is also a member of Student Senate, and has been busy planning events such as Homecoming and school dances. All three are active in Roger Bacon’s many community service efforts, and all three are part of Roger Bacon’s peer tutoring program.

Outside of RB, Riley plays water polo for the Cincinnati Mavericks and Moose Water Polo, while Kellen plays basketball and swims competitively in the summers. All three of the siblings also work as lifeguards, and all three are active in the community service group Phi Lambda Pi.

After the challenges COVID-19 presented to their sophomore and junior years, Kellen, Alaina and Riley have enjoyed the return to normalcy for their senior year. “I have enjoyed going to games again, especially the senior nights, where I could see my friends get honored,” shares Kellen. Explains Alaina, “I am very much looking forward to prom, which we couldn’t attend as juniors, and the trip to Assisi, of course.” Adds Riley, “Definitely the trip to Assisi. As much as I am looking forward to seeing Italy, I am also really looking forward to that time with the friends I have bonded with for four years.”

All three students have made memories that will last a lifetime, from Kellen and Alaina having standout senior seasons in soccer and swimming, respectively, to the return of school events and all of the work and planning that Riley and her Student Senate counterparts have been able to put in to make senior year memorable. However, as Kellen notes, it is still the little things that have made RB so special. “I loved the Homecoming game this year, when almost the whole student body showed up, and we were super loud, and we won big,” shares Kellen. “One moment that really stands out the most, though, was after one of the AP exams, some friends and I went to Skyline, and saw Mr. Schad (RB principal) and Mr. Burke (RB Advancement Office) were there. Not only were they so happy to see us, and asked about exams, we later found out they picked up our check. It was just typical of the kindness that Roger Bacon embodies throughout the whole school, from the top down.”

While the RB family knows the Finan triplets well, they don’t necessarily know the birth order. “I’m the oldest,” shares Alaina, “followed by Kellen and then Riley.”

With graduation just a few short months away, Riley, Kellen, and Alaina could not be happier with the four years they spent at Roger Bacon, together. They are thrilled with the choice they made, and share words of wisdom for those students looking to make their own decisions.

“I am so happy I chose RB, and think any student should that wants a high school that feels like a family,” says Alaina. “The teachers will help you reach your full potential. And going to a co-ed high school also prepares you for college and your future as you are going to be surrounded by many different people during your life.”

“I think students should choose RB because of that small community that fosters personal relationships with classmates and teachers. If you are interested in fine arts, I would definitely recommend Roger Bacon. The fine arts program is enjoyable yet challenging and has prepared me for college and a career in the art world,” shared Riley.

“There just is no school that has the same environment as Roger Bacon,” shares Kellen. “Roger Bacon is a close-knit family, something I was drawn to right away and something that I have really loved during my time here. That is Roger Bacon.” 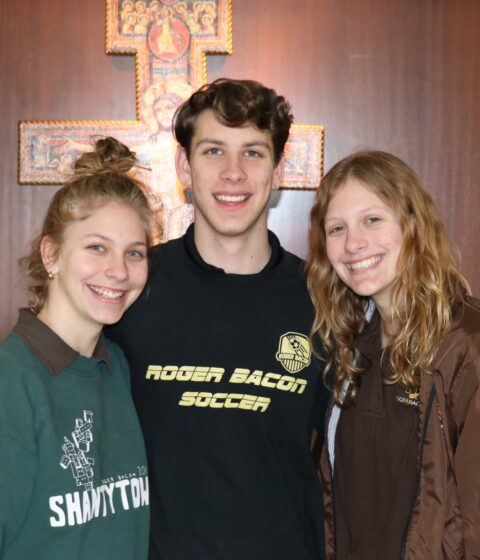 “I have taught AP English to Alaina, Riley, and Kellen for two years. They are all hard working and intelligent students, but they each bring a unique perspective and personality to the classroom. Alaina is direct and analytical. Riley is an 'out of the box' thinker. Kellen is an observer who takes it all in before stating an opinion. I have enjoyed teaching all of them and know they will go on to do great things.”