If you asked senior, Richard Allen what makes Roger Bacon High School special, like many others he would tell you the people. “Roger Bacon is and will always feel like one big happy family to me.”

The family environment that Roger Bacon prides itself on was something Richard came to rely on quickly when an unexpected tragedy hit. During the first semester of Richard’s freshman year, his father unexpectedly passed away, and having the Roger Bacon community rally around Richard became very impactful. “Once my Dad passed away, I had friends and teachers checking on me, from Mrs. Romolo to Fr. Roger to my friends, Timyone and Beamer, everyone was making sure I was okay,” says Richard.

Richard is so glad he chose Roger Bacon, not only because it was his father’s push to get him here, but because of the friendships he has made and the way the school has changed his life. “I went to public school until 6th grade and transferred to Corryville Catholic as a 7th grader. I know that if I still was at a public school I would be on the streets,” Richard continues, “The respect level is different, there are more opportunities here (Roger Bacon) and I have to apply myself and do well here.”

Now, halfway through his senior year, Richard has played football for four years, assists with the bowling team, runs track & field, and also works and serves his community on the weekends. His love for service to the community drove him to take Fr. Roger’s class on service learning. Richard and his classmates hope to pick a specific organization, preferably with animals, and volunteer weekly. They will then report back to Fr. Roger and the rest of his class. Richard himself can hardly believe that senior year is almost over, but is looking forward to all the senior festivities, such as Prom, and of course graduation. Richard is looking into trade schools to learn more about construction. His father owned barber shops around the city and Richard may also be interested in pursuing this path.

Richard’s favorite memory is the football team going to the final four his sophomore year and the close relationships he made throughout that season. It is these close relationships he is most thankful for, as well as being grateful for all the faculty & staff that have made such a strong impact. In particular, he appreciates science teacher Autumn Meyer for being such a positive influence. “Ms. Meyer pushed me to be a better person and helped me to be a successful student, even if it wasn’t work for her class,” says Richard.

Four years after choosing Roger Bacon, Richard can’t imagine his life without it. When asked what he’d tell a prospective student looking to make their decision, Richard offers “Roger Bacon is just life-changing. I’ve met lifelong friends and staff that are outstanding, and truly love me.” 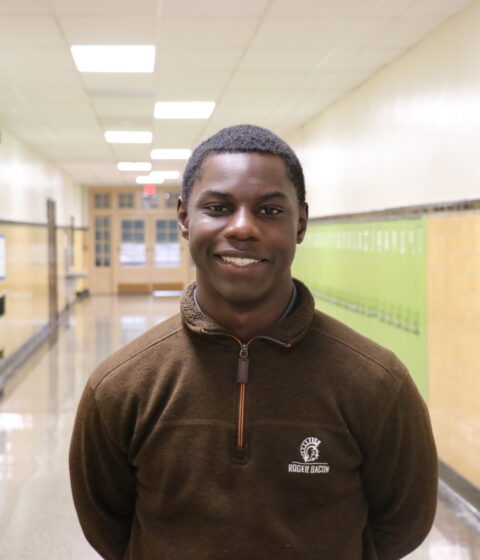 “Richard is a kind, thoughtful, and determined young man. His positive energy and smile are infectious and he is an excellent leader in the classroom, on the field, and on the track. His determination and strong ability to lead has made me proud as his teacher and coach. Richard has been such a pleasure to have as a student and the entire Roger Bacon community certainly will miss him when he graduates this year!”