If there was a person who has been the Face of RB this year, it has been Noah Nixon '17. Many others around our community recognized this too. Noah was nominated not once, but three times to be our Face of RB. Noah is the Student Senate President, which means he has a lot of face time with the Spartans. Not only does Noah lead the Spartan Army at sporting events in cheers; he also emceed all our pep rallies this year, needless to say, the Spartans know Noah.

As a freshman, Noah stood up in front of his flex bell and said, "We are going to be a great class, don't worry." He set a tone for the Class of 2017. His classmate, RJ Ravancho was inspired by Noah that day in their flex bell. RJ says, "After Noah stood up that 2nd day of orientation, I came to realize that it was going to be an awesome next four years. As it turns out, Noah has been in all of my favorite classes each year." The next four years have been awesome for the Class of 2017. A renovated building, a growing school and new ideas have made their time here special. Noah says, "This senior class is living up to its potential, we have some really good leaders who when called upon, step up." A few names that Noah mentioned are: former Face of RB Sam Johnstone, Hannah Clark-Havron, Zoe Bay, Abby Merz and Courtney Niesen.

Noah's time at Roger Bacon has been filled with plenty struggles, a lot of fun, and an abundance love. "Roger Bacon is my second home. I really love it here. As this semester is closing, I am looking forward to being at the top of the pack for a little longer, before I am thrown out into the real world." Noah is excited and a little nervous, but feels he has been prepared for college. "I have learned over the past few years I am an auditory learner. I feel Bacon has done a great job of preparing me. I know I will be ready for big lectures and writing research papers no matter where I end up." Noah plans to double major in Political Science and International Affairs with a minor in Spanish at either Ohio University or Ohio State University.

Noah has a caring heart and a compassionate spirit, he hopes in 10 years that he is helping better his community. "I hope to be involved in politics some way or another. I just want to be a nice guy, and help make the world a better place." He is already doing that. Teachers and classmates a like all say the same thing, that Noah is a good guy. According to Ms. Brizzi, "He cares so deeply about Roger Bacon and puts all people here before himself." Ms. Moore also thinks that Noah is a stand up Spartan, "Noah goes out of his way to welcome everyone to Roger Bacon and makes them feel included in the RB family. "

And that classmate, RJ Ravancho, may have said it best: "Noah, as I stated earlier cares about everyone here. He exemplifies Fraternity by treating everyone the same. Noah doesn't see himself as above the Freshmen or underclassmen -- he sees himself as equal to them. He doesn't care about who you are, where you come from, or what your story is -- he treats everyone the same way. He provides a person to talk to when needed, he helps you if you are facing a hardship, and most importantly he knows how to cheer people up when they need it." 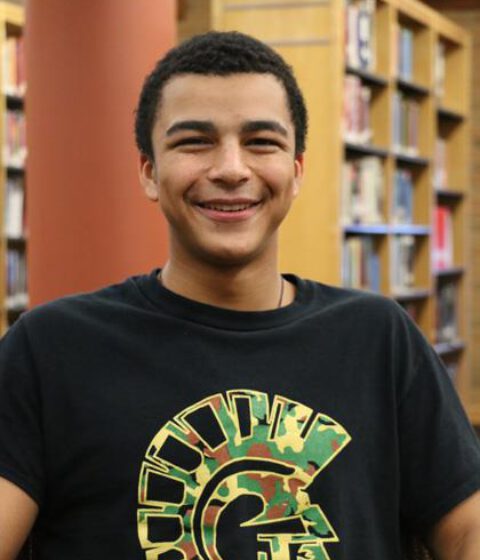 “Noah exemplifies Fraternity by treating everyone the same.”