The biggest difference from freshman year to sophomore year for our newest Face of RB was the anticipation of making friends. Nick ’20, feels that he was nervous for sophomore year academically, but socially he was ready, “Coming in as a freshman, you are worried about making friends – who are they going to be? Sophomore year has been great because I know my friends, and I have been able to cultivate those relationships and be confident in our friendships.” Nick, a former student from St. Vivian, came to Roger Bacon with a lot of the same friends he currently has, but was happy to make new friends with bonds he didn’t even know existed. “I have become really good friends with Gunnar ’20, and we realized that both our moms went to RB and graduated a year apart – it just goes to show you the true family atmosphere at Roger Bacon.” The idea of discovery and knowing oneself was echoed at the sophomore ring ceremony where Nick and his classmates were presented with their Class of 2020 rings. “Doc spoke at the ceremony, I wasn’t expecting it to be that way. He talked about how our rings are a representation of ourselves and that our connection to Roger Bacon and our friends will live on with us for the rest of lives. He mentioned that he still spends time with his classmates from Roger Bacon, after 30+ years -- I hope that the bonds I have created here last that long as well."

Nick admittedly is not the most involved and that is something he hopes to improve on. “I set goals for myself at the beginning of this year, I wanted to be on the varsity basketball and volleyball teams. I also wanted to get good grades and make honor roll.” Even though he didn’t make all his goals, Nick says he has the same goals for next year with an added extra, to get more involved. “I need to get involved more. I am interested in Mr. Mason’s RB 180 group – I think that would be a cool way to get more involved.” Nick’s honest and kind manners are what help him stick out in the classroom, specifically to Mrs. Karle who nominated Nick as our newest Face of RB, “One of my favorite things about him is how kind and polite he is, but it’s in small, simple things. He asks if he can help me pass out papers. He says “please” if he asks to do something little like get a drink of water. He is quiet when he’s supposed to be and he participates in class when he’s supposed to. It’s simple things like that that can make a teacher’s day, and Nick totally makes me smile when he is his normal self.”

Even though Mrs. Karle believes that Nick embodies our current quarterly Franciscan value of Simplicity, when asked to pick the value he feels best describes him, Nick chose -- Discipline. “You have to be disciplined in everything you do. Discipline shows people’s character, you always have to be focused but can still have fun with it. Discipline is something that can carry over to anything, whether it be school, sports, family or friends.” Mr. Spaeth saw firsthand Nick’s work ethic as one of his coaches last year, “Nick is a polite, kind and hardworking young man. I had the pleasure of coaching him in basketball his freshman year and he continuously showed up and gave his full effort and attention at every practice.”

As the school year winds down, Nick is looking forward to the summer, getting a new job, spending time with family and a much needed break. He definitely is not as anxious moving forward into his junior year but is ready for the challenges ahead. 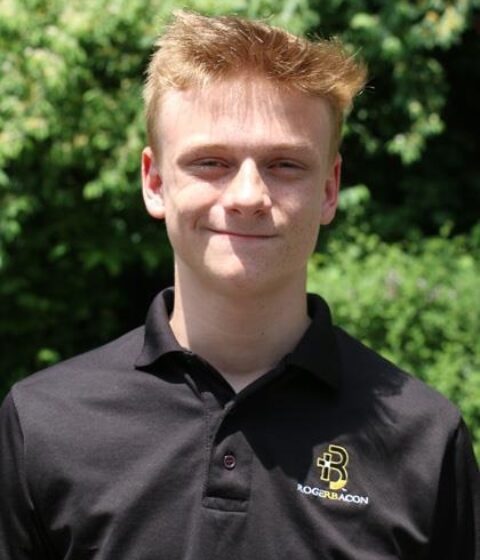 “Nick is a wonderful student and great role model to his peers. I had the pleasure of having him in my group for the GO Local project and he was so excited and enthusiastic about being able to serve others and help the community. It was great seeing him set that example and the other students follow along with him.”