When asked to describe herself, Kelly ‘20 said -- “Determined. Creative. Open-Minded.” Teachers seem to have the same idea, she is the true definition of a Spartan, disciplined, hardworking and courageous. According to Coach Neal, “The first words that come to mind are conscientious and hardworking. It’s truly a pleasure having her in class. She’s a great example of what all RB students should strive to be!”

Kelly has been brought up in a family full of Spartans. Her Mom and Dad both graduated from Roger Bacon in 1987, and she is the fourth of their children to come through Roger Bacon. “I know everyone always says this, but I knew Roger Bacon was for me because it is smaller than the other schools. The one-on-one attention with teachers gives it that family atmosphere that was so desirable.”

That small family feel has seemed to lend itself to Kelly. She is an Assisi Scholar and member of the basketball and volleyball programs. Kelly has made her mark on the court in just her first year and half of high school. On the volleyball court, Kelly started off on the freshman team for a few weeks, and quickly worked her way to starting on JV and this year started on the Varsity squad. On making Varsity this year Kelly says, “It is reassuring that my hard work is paying off. It was a big weight lifted off my chest; it pushed me to do my best.” Not only did she make the Varsity volleyball team, but Kelly was forced to learn a brand new position, Middle Blocker. “I struggled at first, as the season progressed, I saw improvement and I actually began to like it better.” Coach Alyssa Flading, takes notice of Kelly’s work ethic and openness to trying new things, “Kelly is exactly the type of player you want in your program. Hardworking, inquisitive, always wanting to improve, and a great teammate. Kelly had a great first season on varsity and I can’t wait to see what the rest of her volleyball career holds for her.”

Kelly has been working hard in the classroom too. “The academics are more difficult sophomore year. I am taking my first AP course and I had to double up with math to stay a member of the Assisi Scholars Program, but it is worth it.” Kelly did not test out of Algebra I as an 8th grader, so now she is taking Algebra I and Geometry as a sophomore so she can continue as an Assisi Scholar. “I don’t really have any electives, but my favorite class is Geometry with Mr. Kathman.” Mr. Kathman, also a graduate from Roger Bacon takes notice of Kelly’s family history and her hard work, “Kelly is a legacy in a long line of relatives that also attended RB. She is a very respectful and polite young lady, and she is one of the smartest kids in my classroom. I know Kelly will accomplish great things academically and athletically during her time at RB."

As we transition in the winter sports, it would be appropriate to mention Kelly’s help in transforming the girls’ basketball program. “I am really excited for this basketball season. The addition of Mr. Cheesman has really boosted the program. I came in hoping to make a difference and that our team would be better than previous years.” Kelly and her teammates did make a difference, they had their first winning record in years and it has revitalized the program.

Coach Cheesman has nothing but good things to say about Kelly, “I have had the privilege to get to know Kelly Brenner in many different settings: as a student, as a player, and as a person.

As a student, she was a freshman in my Honors Biology Class. Kelly is organized, takes meticulous notes, and strives for mastery.

As a player, she led team in scoring as freshman and earned All-Conference and All-District honors. Kelly is poised and carries herself with a quiet confidence, never shying away from big shots or challenges.

And as a person, she is selfless. Kelly puts others first and represents the Franciscan Values that we at Roger Bacon High School strive to instill in our students. “

A selfless person with a never back down attitude, Kelly embodies the Franciscan spirit and what it means to be a Spartan. 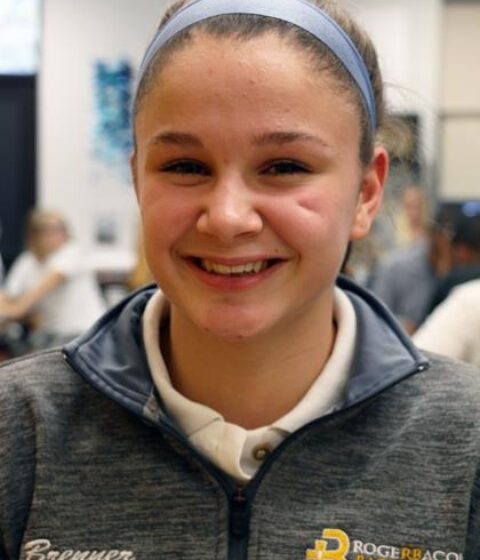 “I know Kelly will accomplish great things academically and athletically during her time at RB.”