Kaeley Hawkins, ’24, has a story that is familiar around Roger Bacon. As an eighth grade student at Nativity, she originally thought an “all-girl school” might be the choice for her. A shadow visit to Roger Bacon changed all that. “I wanted to look at a co-ed school, and Roger Bacon was really the only option. It had such a great reputation,” shared Kaeley. “It was a great shadow day. I just loved the sense of community at Roger Bacon. I liked how boys and girls interacted. It was like the best version of the real world. People were having such fun being at school. They were giving high fives in the hallways, smiling, talking to each other, it was just a happy place and where I knew I wanted to be.”

As Kaeley begins her junior year, she feels a sense of joy that she is able to fully experience that unique sense of community that drew her to Roger Bacon. “My freshman year was anything but normal, since attendance at games and events was limited due to COVID-19. One of the things I loved best about Roger Bacon was the overwhelming support the students have for each other, and I really missed that. I am thankful as a junior we have a return to full normalcy, from games to dances, and everything in-between,” says Kaeley.

In fact, it is this overwhelming support that is one of Kaeley’s favorite moments here at Roger Bacon. “It was my freshman year, and we were playing a volleyball game here at home,” notes Kaeley “and I just remember turning around at one point an seeing the student section just completely packed with students, all of them cheering as loud as they could. The realization they were there for me, for my team, this freshman volleyball team, and we meant that much to them to show up like this and support us, it was just an awesome feeling.”

Kaeley is a member of Roger Bacon’s Assisi Scholar Honors program, as well as National Honor Society. She is very involved in community outreach, played volleyball her first two years, and moved over to manager for the varsity for this year. She also is very involved in community outreach. Explains Kaeley, “What I love about outreach is that we get to create projects and service opportunities, not just perform them. It gives a real sense of ownership and satisfaction, and just adds to our sense of community here at RB.”

Kaeley’s favorite class is AP U.S. History, a common answer amongst students at Roger Bacon thanks to teacher Dr. Paul Wittekind. Dr. Wittekind is among Kaeley’s favorite teachers at RB, along with Mr. Joe Hetzer and Ms. Annie Knudson. “The teachers at Roger Bacon are just awesome, and such a vital part of this special community,” explains Kaeley.

One thing many people may not know about Kaeley is that she made a national television appearance as a fifth grade student at Nativity. Kaeley was a guest on Harry Connick Jr.’s talk show, where she introduced an invention she made, the “boot blower” a leaf blower that attaches to a shoe. “It was a lot of fun and I even made a little money from it,” says Kaeley. “Most people, if you search me, this is the first thing that comes up!”

Even though she has most of her junior year in front of her, Kaeley has started thinking about her senior year already, as well as life after Roger Bacon. “I definitely am looking forward to all of the fun things that will happen next year, from the dances and senior events, like Homecoming, Prom, senior lock-in, and senior prank, as well as the pilgrimage to Assisi, which will be awesome. I also look forward to my sister, Elyssa, possibly being here as a freshman with me. That would be great,” shares Kaeley. “I am also taking my first college visit soon, to Vanderbilt. Although, Ohio State, Miami of Ohio, and Dayton are my top 3. I plan to study psychology, and go on to get my doctorate and work in research.”

As for her advice to all of those students, like her sister, Elyssa, who are in the midst of making their high school selection, Kaeley shared the following: “I would definitely say that Roger Bacon is, honestly, not only a real community, but a real family. I just didn’t see this at any other schools, and don’t think you can really find anywhere else like you do here at RB,” says Kaeley. “It is so special here, and there are so many opportunities for so many types of people. From sports, to the arts, to academics, to clubs. There is something for everyone. I am so glad I chose Roger Bacon!” 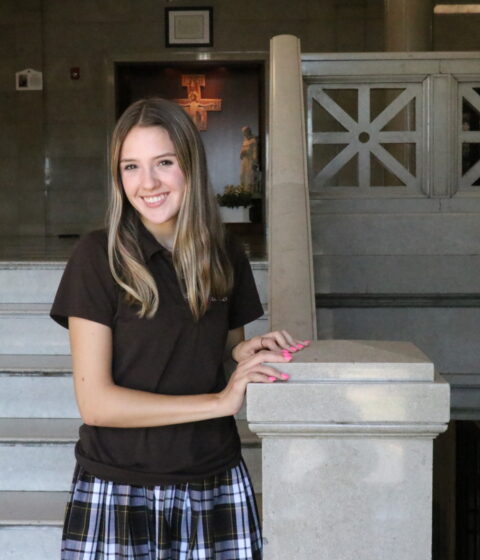 “Kaeley is amazing. RB is very lucky to have someone that is so driven in life and willing to go the extra mile to attain success. She stands as such a wonderful model to classmates and future Spartans. Kaeley's work ethic and determination in life are unmatched - no matter what she does, a high realm of success is achieved. If she’s not hitting the books, then she’s doing something for the greater good - whether it’s playing/managing sports teams, babysitting, involving herself in clubs and community service, etc., her schedule seems to always be booked. Kaeley is also an incredibly sweet and caring young woman – she’s always looking after her crazy classmates and peers along her way. Kaeley goes above and beyond in life and does it with an infectious smile. There is no doubt that she is destined to do great things in life.”