Emily ’18, has made her mark at Roger Bacon, and many students may not even know it. Mr. Montgomery believes, “Emily may be a ‘hidden’ Face of RB. You can normally find her behind the scenes, behind a camera, or behind the audience in the Fine Arts Center booth.” Emily’s ability to make things run smoothly behind the scenes has given her the opportunity to not only be the fall play’s Student Director, but, now she will be the Student Director for the spring musical, Beauty and the Beast. “My job as the Student Director is to keep everything in order -- I’m kind of like Ms. Murray’s right hand man. I have an assistant too, Julia Funk ’19, she is great and it’s nice to know she is just as enthusiastic about drama as I am.”

Emily became involved in the Drama program her sophomore year and it has developed into a passion. “I want to major in digital media production, and my involvement with the Drama Club has inspired me to pursue this dream further.” Her dedication to academics has given her the opportunity to attend either Eastern Michigan University or Bowling Green State University -- she is still deciding. Her assistant student director doesn’t know how she does it all, “She is involved in so many clubs and activities both inside and outside of school. I honestly don’t know how she manages to juggle it all, along with her AP classes. Emily has a great work ethic that really reflects what Roger Bacon values.”

Julia hit the nail on the head. You would think being student director plus your academics would be enough, but not for Emily. Emily is the captain of the school’s gymnastics team, a crew member for RB3, she is involved with Magnified Giving and St. Vincent de Paul, and that is just in the building! Emily works at the Powell Crosley YMCA in Childwatch and she is the birthday party hostess. Emily also delivers the newspaper in her neighborhood, and has been doing so since the 7th grade. President Tom Burke has noticed Emily’s dedication, “Emily is an outstanding student leader, I have no doubt she will be successful in whatever path she chooses next.”

Recently, Emily along with four other Spartans participated in the Night for the Fight, presented by CancerFree Kids. This event is an all-night fundraiser for pediatric cancer research where 1,300 high school students from around the Cincinnati area raise money for cancer research. Even though they were not on the same team, the involved Spartans raised over $600 towards the grand total of $245,019. This was Emily’s third and final year participating in the event, “Last year, I was a student leader. I had to plan games for the ballroom. This year I have been so busy I wasn’t able to commit the time needed to being a leader, but I still wanted to join in the fun. It was such a great time and I’m sad that this experience is over.” Emily looks forward to getting involved in other philanthropic endeavors next year at school.

When asked to describe Emily, her friends had the same things to say. John Ezenagu ’18 says, “Emily is really fun to be around! She really puts a lot of time and energy into people and things she cares about. She truly defines what Roger Bacon is all about!” Other friends echo John:

“Emily has inspired me to try many new things that I now love. She is always a bright and happy person to be around!” – Sydney Cardwell ’20.

Emily truly is a great Face of RB, hidden or not. 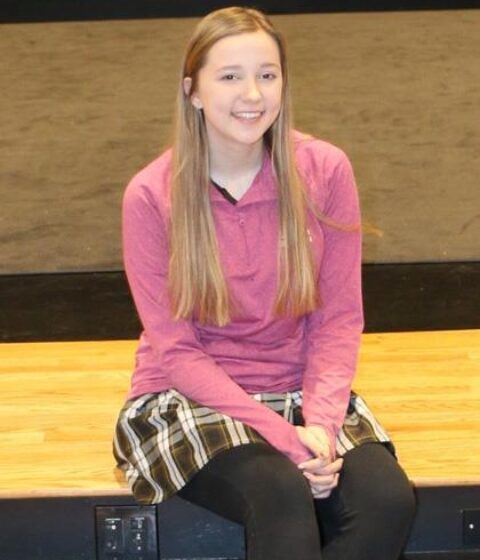 “Emily is a wonderful student who is willing to learn and that can take the lead. As a member of Drama Guild, I have seen her grow into a true leader as she has been appointed to Student Director twice. She exhibits great knowledge of technology, social media, design, blocking for the stage and has a passion for musical theater. Emily is truly a sweet person with a smile that radiates.”