Senior Corinne Crowe did not necessarily have any intention of attending Roger Bacon as she left John Paul II elementary school. Even after a great shadow day visit, she knew it would be difficult to break a family tradition at a local all-girls school, especially since her two sisters were currently students there. It wasn’t until Corinne attended Roger Bacon’s eighth grade scholarship ceremony, Celebration of Success that she started to see the potential to break with tradition. “I just remember hearing Mr. Schad talk about how special Roger Bacon is, and that it was small, and that it was diverse, and full of all of these amazing students. I really thought I was going to start crying while he was talking. I could suddenly see myself here, and felt completely at home. I knew that this is where I belonged,” shares Corinne. “Looking back, I have absolutely no regrets. It has been everything I have hoped for and more.”

Corinne has made the most of her time at Roger Bacon. She is student body president, an Assisi Scholar and member of the National Honor Society, a captain of the girls soccer team, a Community Outreach Board Member, a senior leader, a member of the Drama Guild, a student ambassador, a Joy retreat leader, and has had some involvement in almost every extra-curricular activity that Roger Bacon offers over the last 3-4 years. “It can sometimes be a little overwhelming given all of the activities and things I have going on here, on top of the academic load of being an Assisi Scholar, but I really can’t imagine a better place to spend my time. Especially after COVID and seeing how easily everything can be taken away. I love being here, and doing what I can to make the most of the experience at Roger Bacon, and hoping I can at the same time make Roger Bacon just a little bit better,” says Corinne.

One of her favorite aspects of being here is how much the students buy in to the unique culture of the school. As Corinne shares, “My favorite part of Roger Bacon is the sense of community that exists, and how our students not only treat themselves and the people around them differently, but also the things around them. One of my favorite things is that our students stay after games to clean up the stands after themselves. Not just at our home games, but at all of our games. That is our students living our Franciscan values authentically and it makes me so proud to go here.”

Corinne also believes the co-educational model has been important to her success and growth as a student. “There is no doubt being in an environment that is more like the real world has been a benefit. Not only has it not held me back academically to be in a co-ed school, I actually think it has helped me. I am also the student body president, and to have that leadership role in a co-ed school is empowering,” says Corinne.

As her senior year starts to wind down, Corinne has her sights on future plans. This includes attending either Ohio State or the University of Cincinnati and studying to be a psychologist. As Corinne explains, “Right now I am leaning towards being a sports psychologist, or perhaps a therapist that can help people overcome the mental stigma when they have a disability. One of the lasting effects of having gone to Roger Bacon is a desire to help other people. I could also totally see myself coming back here to Roger Bacon to be a school psychologist. It is something I think about a lot, and can’t imagine there is much better than getting to come home to make an impact.”

When Corinne looks back on her four years at Roger Bacon, she knows she made the right decision. “I can’t imagine having gone anywhere else. This has just been the happiest four years I could have had,” says Corinne. “My advice to those students looking to make their own choice is to follow you gut, even if that means you take a chance. My parents and I didn’t know as much about Roger Bacon when I started the process, and four years later we just are in love with this place. When you stick with your gut and follow you heart, it usually leads to the best places. For me, that was Roger Bacon.” 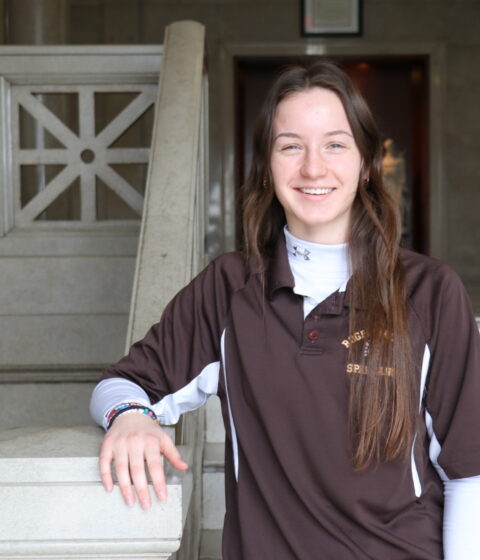 “Corinne is a great student. She is hard working. She always has a smile on her face and is a joy to have in class. Corinne also works very hard for the Body Bacon outside of the classroom, in particular as a member of the girls soccer team and as a student leader through Student Senate.”