In the first few months of high school, Corey ’21 has already made a name for himself. On the football field, Corey is all business. With 2 games left in his freshmen season Corey has totaled:

What makes this even more impressive is that Corey has done all this missing nearly 2 games due to injury and rest. Corey broke the single game rushing record in just his 2nd career varsity game when he rushed for 302 yards in a 47-12 win over Western Hills. Corey doesn’t let this go to his head, as Mr. Spaeth says, “Corey exemplifies the Franciscan Value 'humble' more than any other freshmen I have ever met. He doesn’t let the statistics, records or player of week nominations get to his head at all. Whenever anyone approaches me about Corey, I always lead off with how great and respectful of a young man he is. I am so excited to watch him grow over these next four years.”

Just like he is on the football field, Corey works hard in the classroom and recognizes that his teachers do the same. “I give my full effort in the classroom and my teachers give full effort back. I am learning so much already in my first quarter.” Corey knew Roger Bacon was the school for him. When asked why he chose Roger Bacon he simply stated, “It is my favorite high school.” After a little bit of probing, he responded with yet another great answer, “RB was set apart by the diversity. Everybody has their own voice, and has value. My friends help me and I help them, I just feel like Roger Bacon is setting me up for success.”

The Roger Bacon community recognizes Corey successes already in his freshman year. His favorite class is English, which isn't because he likes to talk. Corey likes to listen to others talk, and take in their perspective on things. His English teacher, Dr. Downey appreciates Corey’s demeanor, “Corey’s leadership extends way beyond the football field (and that is saying a lot). He is in a constant state of improvement and his work ethic reflects this. Every day in class, Corey shows up ready to learn. He is not afraid to ask for help, whether it be from me or his peers. Corey’s determination, curiosity and unique perspective make him a true example for Roger Bacon’s Class of 2021. I could not be prouder of Corey at this point in his journey and look forward to learning with him as the year progresses."

All of our students understand what it means to be Franciscan. Corey, who graduated from our neighboring Franciscan grade school, St. Clement said: “Going to a Franciscan school has taught me how to be a good person. Being Franciscan means putting others in front of myself.” When asked which Franciscan value meant the most to him Corey replied, “Humble – because I feel like that is the biggest part of having a lot of fame. You know who you are and where you came from.” Without having any idea that Corey picked this value, Fr. Roger wrote: “Humility is many things. For Saint Francis, he exhorted the brothers saying, "Be all that you are before God, nothing more and nothing less." Corey Kiner is a young man who strives to be this genuine, authentic self before God that St. Francis desired for all. Mr. Kiner's smile, respectful manners and true desire to grow in faith and self serves as a model of our Franciscan value of humility.” 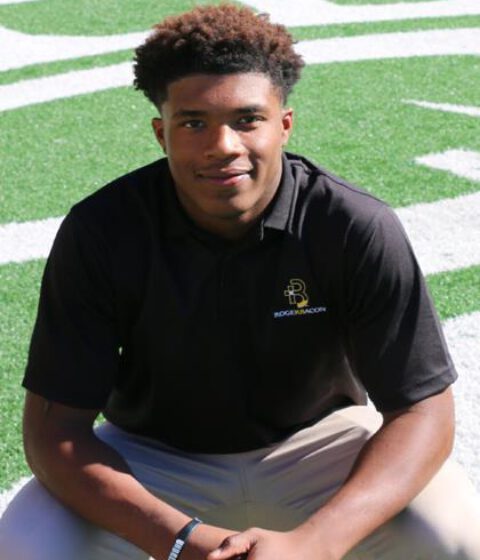 “He has already taught me so much. For that, I am blessed and thankful to have him as a student; I am better because of students like Corey.”