When asked what it is he loves most about Roger Bacon, sophomore Braden Pinyard didn’t have to think very hard. “I love that people here see you for who you are, and that you don’t have to be anything other than your true self,” says Braden. This is a Roger Bacon characteristic that Braden has experienced firsthand.

In just over a year at Roger Bacon Braden has become one of the “big men on campus” despite being one of the smaller kids at RB, a characteristic Braden fully embraces. Braden is admired greatly by his classmates and stands out amongst his fellow students with his confidence, determination, outgoing nature, and great sense of humor. Braden has a personality that at times can seem larger-than-life, and always seems to be quick with a smile, and an endless supply of pop culture references and jokes.

“I am an outgoing person, and I like to keep things light, so it is fun for me to throw in my favorite quotes if it fits,” says Braden, with Star Wars his favorite source, “especially the original trilogy and Clone Wars.”

Braden attended grade school at Nativity, and when it came time to choose a high school, he had the choice of two completely different environments. “I wanted great academics, and I got to choose between a school that is very large and all boys, and Roger Bacon, which is smaller and coed. I also was intrigued by Roger Bacon because my mom went there, and my grandma went to Our Lady of Angels,” shares Braden. “I shadowed with Justin Dinh ‘22, and I just felt right away like I belonged at Roger Bacon. It was smaller and more personal. It felt like people already knew who I was, and I didn’t even go there yet. I felt I would fit in better at Roger Bacon, and that I wouldn’t get lost.”

It didn’t take long for Braden to realize he made the right choice. At Roger Bacon he found a place he not only fit in, but stood out among his 520 fellow Spartans. Braden also fell in love with his new family. “I love how welcoming everyone is. From the staff to the students, everyone is nice, and everyone really tries to make a personal connection with you and show they really care about you,” says Braden.

Braden also loves how considerate everyone at Roger Bacon is. As Braden explains, “Every day you see people putting other people first. They do things like hold doors for each other, which seems like a small thing, but it is not something you see a lot of people do any more, especially when it means they may be late for something, like class! Everyone here is always putting other people first, just because it is the right thing to do. Who wouldn't want to be in a place like that?"

Braden is involved in the chess club and Ultimate Frisbee, and is looking forward to exploring more clubs this year, since many were suspended last year due to COVID-19. When he is not in school, Braden likes to play video games and to challenge himself creatively building Legos. “One of my favorite things to do is my own Lego creations. The sets are fun, but I like to see where my imaginations takes me,” says Braden.

Although just a sophomore, Braden already has sights on life after Roger Bacon. “I plan on going to the University of Cincinnati, with a friend of mine. I am going to study coding and web design,” shares Braden.

Despite the challenges associated with a freshman year mired in COVID-19, there were definite highlights, such as a friendship he developed with Ohio’s Mr. Football, senior Corey Kiner, ’21. “Corey just said ‘Hi’ to me one day, and at first I couldn’t believe he knew who I was. He is a great example of the kind of person that goes to Roger Bacon, though. Everyone here is friends, and everyone cares about one another. We just became friends after that. I won’t forget after the homecoming football game, he played such a great game, and he made a point to come say ‘Hello’ afterwards to my family and my brother,” shares Braden. “If you think about it, where else could a senior football star and a freshman who likes video games and Legos become friends? That is Roger Bacon for you.” 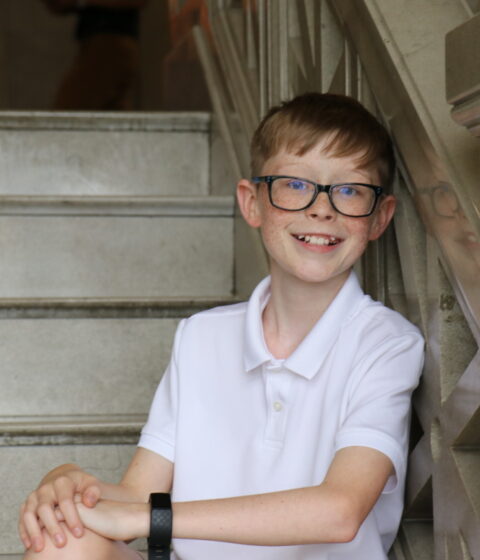 “There are so many great qualities about Braden Pinyard. He excels in the classroom, he has a wonderful and engaging sense of humor, and he even has a healthy love for Shakespeare. He has the personality of a scholar and the sharp-cutting wit of a pinyard knife. Students like Braden are what make Roger Bacon a special place.”