As an 8th grader on Cincinnati’s West Side, sophomore Zachary Meister was not even thinking about Roger Bacon when the high school process began. Two single-sex schools stood as the leaders, despite the influence of his Pastor at Our Lady of the Visitation school, Fr. Marc Burger, RB class of 1972.

It didn’t take long, however, for Roger Bacon to not only get into the mix, but to set itself apart with a family environment unlike any other. As his Tower Titan football team began practicing at RB, the Spartans got on Zach’s radar. After a great shadow day and open house, Roger Bacon stood above all others.

“Other schools I visited, they would talk about being a family, or having a ‘brotherhood’ but you could pick out right away who the groups were. They didn’t mean the whole school, just their own teams. At Roger Bacon, it is real, and everyone leads by example. I had Evan Webb ‘21 as a shadow host, and it was clear it wasn’t just all talk. Everyone was included. Everyone took care of each other. Evan is really like that, and I felt so comfortable and accepted here,” says Zach.

Roger Bacon guidance counselor and assistant football coach Solomon Tentman ’10 also made an impact, helping Zach see that the culture of the school carried over to the football field. “He really showed me that everyone has value, just like Mr. Schad tells us every day. If you show up and work hard, give your best, you are appreciated. It isn’t just winning and losing, it is much more than that,” states Zach.

“Zach is an extremely understanding individual who does whatever he can to make the most of any situation that he’s in. He doesn’t take things for granted, he’s very perceptive of his environment, and he continues on until whatever task he is performing is done. Zach is a natural leader of his peers, and his cheerful personality makes people gravitate towards him."
- Solomon Tentman, Guidance Counselor, Coach

Among the highlights so far for Zach is being called up to varsity the fourth game of his freshman season, an honor few freshman get to experience so soon. He also loves that his family has been so embraced by the Roger Bacon community. Having his parents and sister so connected to his first two years here has made it all that much more special, including having his dad on the sidelines helping with football, as the team has won league titles and qualified for the playoffs in back-to-back seasons.

He also has found comfort in having his fondness for the Franciscan charism carry over to RB. He highlights Father Roger Lopez, OFM, who is available to the football team before the game, and during the games on the sideline. As Zach shares “I just love having him to talk to before the game. Last year we had a game for breast cancer awareness, which is a personal thing for my family. Just having him to talk to, to help clear your mind, to give perspective, it just means so much.”

Despite only being one quarter into his sophomore year, he has started to look ahead to college. Although he’d love the play football at the next level, he hopes to use this as a means to other dreams. This includes earning a business degree, and perhaps opening a business dedicated to one of his other loves. “I love to cook. I could see myself earning a business degree, and then opening my own restaurant. That would be awesome. I love football, but that is just one thing, and I have a lot of different interests.”

As for his advice to future Spartans making the same tough decision on a high school he had to make, Zach says “Roger Bacon just has the best people. I love that we have so many different backgrounds, and these great things that make us all different and unique. Boys and girls, Catholic or non-Catholic, black or white, everyone is accepted here. I don’t just have friends here, and I have a bunch of brothers and sisters I will be friends with the rest of my life. This is what the real world is like. It isn’t just about you, it is about other people, and taking care of them, accepting them, learning from them. When we take that and incorporate our Franciscan values, there is no place like Roger Bacon.” 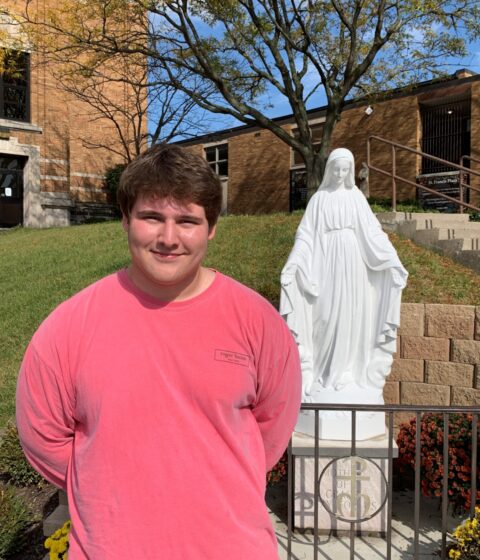 “Zach Meister has one of the kindest souls I’ve ever seen in a young person. His positive energy is infectious, as is his good-hearted character, which is most perceptible through his prayers. Every day in English class, Meister prays over my classroom with such heart and good intent, that it has become something I (and many of his peers) look forward to hearing daily. Meister has undoubtedly made me a better person just by knowing him.”