Grinning from ear to ear, Tyra Jones '19 talked about her decision to attend Roger Bacon High School. "My sister came to RB and I loved going to the games. There was a vibe and an atmosphere here that I knew I wanted be a part of." A quiet student, Tyra does not like the limelight, however, she is interested in joining the Drama Guild this year. "I came to a play when I was still at St. Boniface, Romeo & Juliet, and I was so impressed. After freshmen year, I think I am ready to jump in and help out in our future plays. I would love to be behind the scenes, but definitely not on the stage."

Even though she doesn't want to take center stage, Tyra shines in and out of the classroom. She is a cheerleader at Roger Bacon and a member of a girls assembly group called, Finer Womenhood. Not only is she a member, but the Youth President. In the past year, Tyra and her sisters fundraised money to buy blankets for the elderly, picked up trash in Avondale and volunteered in many capacities around the Cincinnati area. Tyra was nominated to be the Face of RB by a classmate, who recognized the fact that Tyra does a lot for the community.

This past summer, Tyra visited her sister Tammara '11 at Central State University and attended the school's STEM camp. She had an opportunity to work with professors who specialize in chemistry, coding and engineering, just to name a few. According to Coach Brian Neal who teaches Tyra's favorite class, Honors Algebra II, “Tyra is an incredibly hard working and dedicated student. She is conscientious, thoughtful and is a real pleasure to be around.”

As a freshman, Tyra was in all college-prep courses, now, as a sophomore, she is proud to say she is in all honors and one AP course. "I don't score well on big tests, and I feel like the HSPT did not show my true potential." She goes on to give advice to 8th graders going through the application process, "Don't give up; stay organized and balance your time. Stay focused your freshman year and these little things become habits that will carry on through the rest of your high school career."

These habits have been helpful for Tyra and she hopes to keep them up in the future. "Five years from now I hope to be at Howard University, studying Information Technology." Also in the future, Tyra hopes that Roger Bacon stays small. "Our teachers don't know us by a student ID number, they know us by name. They care and are always there when we need them. I hope Roger Bacon still has this same type of atmosphere for Spartans in the future." 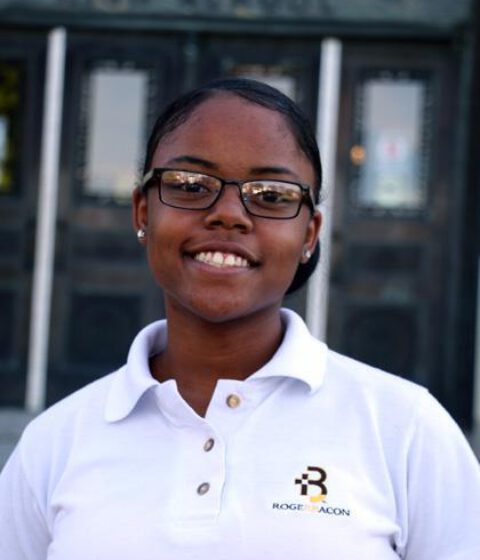 “Our teachers don't know us by a student ID number, they know us by name. They care and are always there when we need them.”