To be an effective member of a team, you have to know your role. Tony Luken '17 has been a member of many teams and has played many roles. His most recent, a member of the Division III State Runner-Up basketball team, just came to an end. "It was really fun to go up state again, and to make it to the championship game my senior year was thrilling." Tony says this group of Spartans figured out a way to work together and push each other to greatness. "I'm not a starter and was part of the scout team, but I worked hard with all those guys. That's why we were so successful. We knew our roles and we all did our jobs well. I'm going to miss being with them."

All good things must come to an end, and Tony's position in the support crew is about to change. Tony is set to play Curly in the Roger Bacon Drama Guild's presentation of Oklahoma! starting April 7th. "I really like being part of a team. However, being the lead role is a little out of my comfort zone. I'm ready to try something that plays to my talents." Tony loves music. He has been a member of the marching band and RB3. He is also a member of the concert band and choir, last year he was the auxiliary percussionist for The Wiz. "I'm confident in my singing ability and remembering the lines. It is still going to be a challenge though, learning all the dances is going to be hard, but I'm excited to be there with everyone and get down to business." Director and Drama teacher, Ms. Murray recognizes Tony's hard work, "He is a person of many talents! Tony participates in planning the all-school masses, has been a Kairos leader and is an outstanding Assisi Scholar. Now he has stepped into the lead role of our upcoming production of Oklahoma!. Though he has never been on the stage in an acting role, he fits in well with the character and is one of the most hardworking people on the stage."

As mentioned by Ms. Murray, Tony wears a lot of hats in the Spartan community. On top of all the aforementioned, Tony is the Treasurer of Student Senate, a member of National Honor Society and is an Eagle Scout. He had two big projects to complete this year. For his Eagle Scout project, Tony restored and painted a gazebo at St. Clare Convent. Tony's Assisi Scholars capstone project also brought out his creative and artistic side. Inspired by his trip to Assisi, Tony researched illuminated manuscript and created his own calligraphy font. He then copied all of Mark's Gospel, in Latin using his own font. "I was inspired in Italy and by the influence of the Islamic faith on the Catholic church specifically St. Francis. The ornate designs I saw were incredible and I was intrigued by the idea of not using images but gorgeous text." This creativity spills over to other realms as well. Mr. Kathman sees it in Calculus, "Tony Luken is one of the smartest and most insightful students I’ve ever taught. I look forward to having him in class every day."

How does Tony have time to do all of this, you ask? "I don't do anything besides what I am doing," he says with a smirk. Tony is dedicated to working hard and doesn't have time to do anything but what he is working towards. Next year he will be attending University of Cincinnati and majoring in Bio-Medical Engineering, he wants to develop devices that could save lives. Coach Neal recognizes that Tony's work ethic isn't just visible on the court, "Tony is a remarkable young man. He is incredibly giving of his time and talents and is a true embodiment of the Franciscan charism." 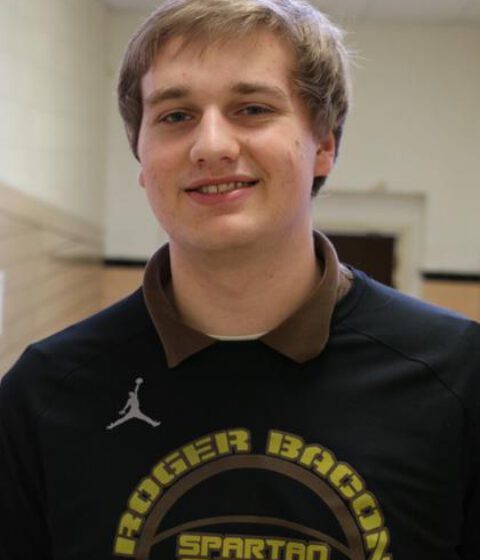 “Tony is a remarkable young man. He is incredibly giving of his time and talents and is a true embodiment of the Franciscan charism.”