When asked why people decide to attend Roger Bacon, they say it is so welcoming, like a family. It is because of students like Thomas ’19 that this culture is a constant at Roger Bacon. If you have attended a football game or volleyball match this fall season, you may have noticed a young man in a wheel chair, this student is Thomas. Thomas, a football player for the past three years, had an unfortunate injury this summer which will keep him from playing football for his senior year.“I had a friend of mine fall into my knee, at the time I thought it was bruise. Little did I know, that I tore up half of my knee. The first four days were miserable, and then I was told I won’t be able to walk for 5 weeks. It definitely changed my mentality.” Thomas has been in a wheel chair for the past month and a few days, he says he has a new appreciation for people who are disabled or living with a disability -- “My friends push me from class to class. Just doing regular day to day things that I have always done are now more difficult.” The thing about Thomas, throughout his journey he has kept a smile on his face and able to stay positive. “School has helped a lot, time flies. My friends have also helped me through it. A few RB alumni (Trey Hennekes ’17 and Hazen Petit ’17) along with classmate Kyle Gibbs have been very reassuring. They have gone through knee injuries, and gave me advice on how to deal with such a tough situation.”

Thomas was nominated for the Face of RB by two members of our community, President Tom Burke and our long time trainer Mel Haney. Mel wanted to recognize how Thomas has been able to deal with such a tough injury heading into his final year of football, “Thomas has worked very hard this past spring and summer to prepare for football, only to be injured right before the season. His injury will unfortunately keep him out of football his senior year, but he has been able to maintain a positive attitude throughout it all. Thomas is such a good person and loves all his peers at RB.” Mr. Burke has witnessed Thomas struggle but in true Thomas fashion has been able to prosper, “As Thomas stood on the sidelines during the first football game of the season, I could see that he was visibly upset. Teammates would come up and stand with him. Quietly, he was both a leader and an inspiration to his teammates. I was so moved by his demeanor and how he stood their supporting his team even in a time of struggle, Thomas is a great example of humility and a Spartan.”

Thomas has been a left guard for the Spartans. The job of the offensive line is to protect the quarterback, and to do this is not easy or glamorous but it is an important job to be sure your teammate is safe and protected. Thomas’ caring and kind demeanor reflects his job on the field. His friend Shannon Seiler ’19 recognizes how devoted Thomas really is, “Thomas is a perfect face of RB; he embodies the values of fraternity and humility. He is always there to help his friends, even putting aside his own anger or discomfort to provide assistance.”

Coach Blaut is missing Thomas on the field this season but sees how Thomas has persevered, “Thomas was a player who decided he wanted to be really good this year and worked unbelievably hard to lose weight, get in shape and become the best football player he could be. When he blew out his knee I have never felt so bad for a kid who lost his senior year. It brought tears to my eyes when I saw him crying on the sideline of the first game this year. It showed me how much RB football meant to him and how much he was going to miss it. We definitely miss him a TON on the offensive line this year. He was going to be a major player for us. His personality is infectious. He is always in a good mood, always smiling and never lets things get him down. His personality carried over to the other players on the team as well. Thomas is one of my favorite players of all time!” 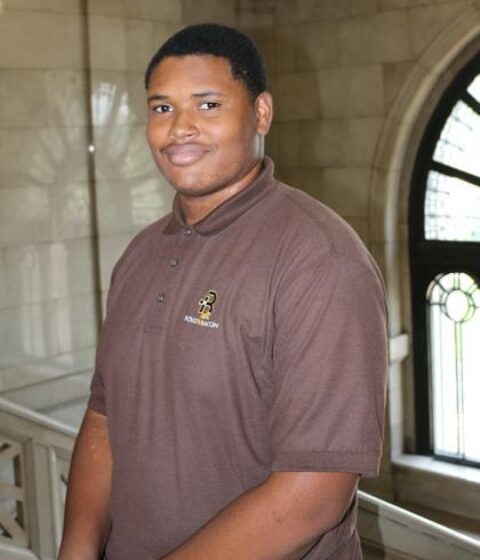 “Thomas has such a positive attitude. He greets everyone with a friendly hi and wave. He exudes joy in the way that he talks to all people, friends and teachers, those he knows well and those he is just meeting.”