When Paul Zlatic was a student at Roger Bacon, he didn’t quite envision himself returning to work at RB. The 2000 graduate and class valedictorian, Mr. Zlatic was heavily involved at the school, specifically community outreach and service. However, he initially saw a career in medicine in his future, and began his studies at the University of Dayton as a pre-med major.

After his freshmen year, Mr. Zlatic began having second thoughts as he contemplated a religious life – a decision that was greatly inspired by his time at Roger Bacon, and specifically the influence of Brother Conrad Rebman, OFM. Brother Conrad was a beloved Friar who spent 12 years at Roger Bacon, and was largely responsible for the foundation of the community outreach program, including “Bacon Buddies.” As Mr. Zlatic shares, “Brother Conrad was just a perfect example of absolute humility. He was just so gentle and loving. Being able to stand witness to the Franciscan charism, and all of the good that was part of this, helped call me to switch majors to Theology.”

With an eye on what the future may hold, Mr. Zlatic also took education classes at Dayton, and enrolled in the Lalanne program through the university. Teachers in the Lalanne program make a two-year commitment to teach in an under-resourced Catholic school and live together in a faith-based community, while pursuing professional and spiritual/personal development. This opportunity presented another life-changing fork in the road for Mr. Zlatic.

“I remember having a long talk with my father, because they wanted me to go to an inner-city school in Detroit, and I just did not want to go,” says Mr. Zlatic. “My father asked if I still loved everything about the program, which I did, and encouraged me to go outside my comfort zone. While it didn’t confirm my decision to teach as a career, I did meet my wife, Allison, and provided an eye-opening experience.”

Upon returning from Detroit, Mr. Zlatic applied for the job opening that would confirm his future career path – a role teaching Theology at Roger Bacon. His first year back at RB, he taught morality to mostly senior students, and fell in love with the interaction and opportunity to make a difference in their lives. “I absolutely loved this first year, and I remember at the end of the year thanking my students for helping to confirm for me what I wanted to do and where I wanted to be,” shares Mr. Zlatic.

After seven years in the classroom, Mr. Zlatic moved to more administrative roles, eventually settling in as Vice Principal and Dean of Discipline. Although a tough job, Mr. Zlatic approaches his role as someone who not only loves Roger Bacon, but each and every student, and the opportunity to help them reach their maximum potential. “I always look at my job as to help kids make progress, not seek perfection,” says Mr. Zlatic. “Kids rise to the expectations you set, so you have to help them choose to reach high. As one of my own elementary school teachers used to say, ‘God doesn’t make junk.’ This sometimes involves tough decisions, but it really is just about helping each student rise to be their best.”

Mr. Zlatic also has the unique perspective of someone whose life has largely revolved around Roger Bacon. From family members who attended, to his own experience as a student, to teaching and working here, he has seen Roger Bacon transition to become the school of choice in Cincinnati, while holding on to the tradition that always made it special. “Roger Bacon has always been a school that exemplifies humility, and kindness. You can pursue excellence here without necessarily trying to be better than anyone else or at the cost of someone else’s success. It has always been a school with a place for everyone. You can see this come to life the way the school comes together as a family. The way there is genuine love and respect for one another. I remember our Franciscan friars attending a basketball game, and participating as the crowd sang and danced to ‘YMCA’ and later the students singing ‘Open The Eyes of My Heart Lord’ to Father Roger. It just showed how authentic the love and admiration we have for each other at Roger Bacon really is,” shares Mr. Zlatic.

As another school year approaches, Mr. Zlatic still looks forward to the opportunity to make a difference for students, and to help them succeed. “I love working with students and families to help them reach their goals. As my kids get older, I have even more appreciation for how much work it is to raise children, and to take this journey with them. This is really what it is all about, no matter how difficult the day-to-day might seem. I had a student a few years ago that struggled his first few years at Roger Bacon. He only wanted to do things his way, and didn’t quite understand how we were trying to raise the bar for him. Gradually over four years, you could see his growth,” explains Mr. Zlatic. “By his senior year, he was looked at by his peers as a leader, he was someone who began treating others differently, and therefore was looked at differently. He was doing what he needed to do to be successful. I loved seeing him walk across stage and get his diploma, and know he now expects more of himself, and is truly going forward to greater things.” 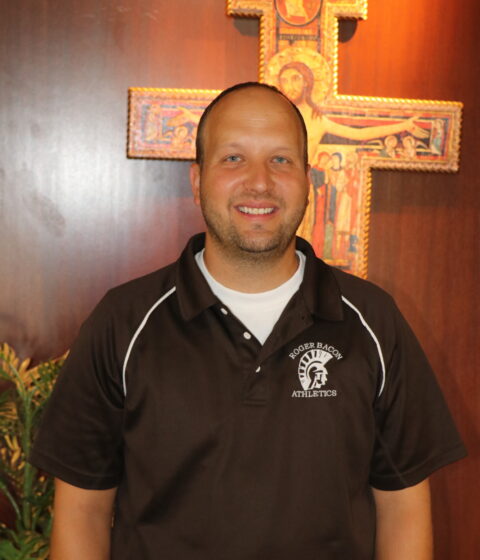 “It has been an honor and privilege working side by side with Mr. Zlatic the past 8 years. His traits which stand out to me are his energy, commitment to the school mission, and most importantly, his dedication to putting our Franciscan values into action. Paul is an asset to Roger Bacon High School and a blessing for the students of RB.”