When asked to reminisce about freshmen year, Nick answered right away, "I was scared. I knew where my place was on the totem pole. I did not want to branch out and wasn't ready to be too involved." As a freshmen, Nick played basketball and volleyball, but his coaches and classmates knew right away there was more to this kid. For the past three years everyone could see Nick had the potential to be a leader, he just needed to find it himself. "I've always known I was a pretty good guy. A good guy who worked hard, but I didn't think that that alone was enough to lead others. I liked to fly under the radar." Nick may have been trying to fly under the radar, but he has been thrust into the position of being a leader. Nick was nominated by his teachers last year to be a senior leader; he was voted team captain for the volleyball team, and now he has stepped into the role of a Kairos leader.

In preparation for Kairos in August, Nick was only interested in being a participant. "Some of the leaders told me I would be a good leader, but I did not believe them. After the 3rd day of Kairos, I knew this was something I wanted to do." Nick feels that Kairos is an opportunity to get closer to classmates - you get to know people's stories and backgrounds. Nick feels he now has the opportunity to prove to himself he is a leader, even though for years everyone has been telling him he is. "Kairos is a time to be vulnerable. You have the chance to see the love of people when you are in that situation. I am ready to lead my classmates on this retreat and let them know they are loved."

This is not the first time Nick will have the opportunity to show his caring heart. Nick was nominated by a Spartan who said that he did a small task that most of the time would be looked over, but she felt he should be recognized for it. "Just the other day, he drove a classmate all the way to Thomas More College to see her art shown on display because she didn't have a ride. He made no big deal about it whatsoever! If that doesn't show you how great he is, I don't know what will." It's the small things that Nick does that makes him such a good guy.

Nick's time at Roger Bacon has been wonderful. Starting out as that scared little freshman, he has matured into a compassionate senior. "Everything people told me about senior year is true. It has gone by so fast. I hope that I can continue to make memories and my friendships carry on past graduation. Even after I'm gone from here, I want to be involved. Roger Bacon is a great place to be!"

When you say the name Nick Beck to teachers and coaches around Roger Bacon the theme is the same. "Solid...great young man... mature...willing to help." Nick's English teacher, Annie Karle, sums up how everyone feels about Nick: "Nick’s kindness and spirit of goodwill is contagious. His attitude of humility is admirable while his excellent work ethic and positivity resonate with all he encounters. He truly is a joy to have in class and to greet in the hallways! Nick is a perfect example of a Franciscan Spartan." 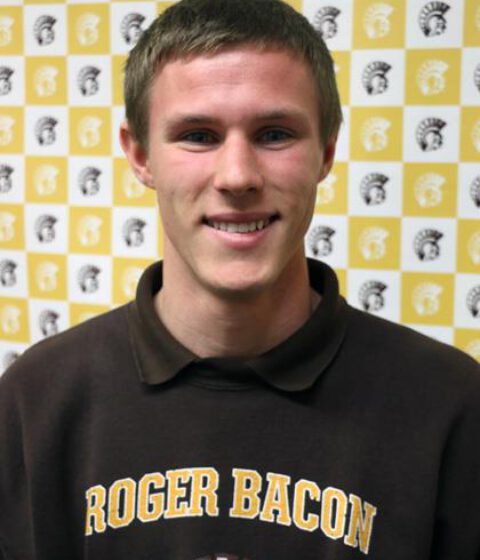 “Nick is a perfect example of a Franciscan Spartan.”