For some students, 8th grade in Cincinnati is largely about figuring out where you want to attend high school. For senior Justin Dinh, that decision was already made. “I knew really early on that I wanted to attend Roger Bacon. My brother Kevin went there, and had a great experience, so it was always the one for me,” shares Justin. Despite his strong feelings for RB, Justin got all of the confirmation he needed during his shadow day that Roger Bacon was indeed the right place for him. “I shadowed with Patrick Mulcahey ‘20, and I just felt like I was part of a family here. Everyone knew each other, and was friendly with each other and even the teachers went out of their way to make me feel at home,” says Justin.

Four years later, Justin has made the most of his time at Roger Bacon. He is part of the Assisi Scholars Honors Program, National Honor Society, a senior leader, vice-president of student senate, a member of the Drama Guild and Community Outreach oard, and plays Ultimate Frisbee.

While his accomplishments and activities have kept him busy, when students of Roger Bacon think of Justin, one word usually comes to mind – FRIEND.

“I’ve tried to make the most of my time at Roger Bacon, because this place is so special, and is such a happy place, and I just want to hold on to this feeling, to hold onto my friends. Especially for my senior year, which is already going too fast, I just want take advantage of everything possible to make it last. Every game, every dance, every event either me or my friends are involved with, I want to be there for all of it,” shares Justin.

Justin says of everything he has been able to experience at Roger Bacon, it is the friendships that mean the most to him. As Justin explains, “I have made friends I know I will have the rest of my life. Like with Jocelyn (Carraher). She is such an important friend to me. Having the opportunity to become such good friends with her my sophomore year, and seeing how our friendship has grown, it just makes me so thankful for Roger Bacon and this amazing environment. I also feel thankful to be at a diverse, co-ed school, where I had a chance to make these friendships with different people. It just feels like a more vibrant environment than other schools because we have such diversity, and both boys and girls. It also makes me feel more prepared for college, because this is what college and the real world look like.”

Justin’s fellow classmates are just now figuring out how much Justin likes to sing, as he had a featured role in last spring’s musical, Once on This Island. He also has a prominent role in this fall’s play, Alice in Wonderland. Even when asked about his favorite musical acts, Justin is ever the true friend. “I think I would pick AJR, for Ellie (Rickenbaugh) because she loves them so much,” says Justin.

This love of music and musical theater even has Justin reevaluating his college plans a bit. “I thought I wanted to be a physical therapist, but I just love musical theater so much, I think I am now going to attend Xavier and study business, with a minor in theater. It is just something I am really passionate about,” explains Justin.

When asked about those “Roger Bacon moments” that have stood out to him over four years, it was a recent experience that reminded him just how different the students at Roger Bacon are. “My friends and I went to an IHOP after one of our football games, and there were a lot of students from a couple other schools there. We watched as these other students were rude to staff and those around them, and caused trouble for everyone in the restaurant. My friends and I looked at each other, and we all had experienced the same thought – validation for all those times Mr. Schad reminds us that Roger Bacon students are different. We just had so much pride that we were Roger Bacon Spartans, and that we carry ourselves differently. When Mr. Schad talks about Roger Bacon helping students become the best version of themselves that they can be, it is true. We also managed to pull together a generous tip for our server to let her know how much we appreciated her efforts,” shares Justin.

For those 8th graders who are currently in the process of choosing a high school, Justin’s advice is simple. “I would pick Roger Bacon a thousand times over. It is a smaller community, a family, and you always have people who care about you, from friends to teachers,” explains Justin. “Teachers like Doc Wittekend, they don’t just want to teach you, they want to help you achieve your dreams, and be there when it happens. They want to develop you academically and spiritually to be your best. From friends you make in the hallways, to the relationships you have with teachers, this is a decision that will be with you the rest of your life. This is Roger Bacon.” 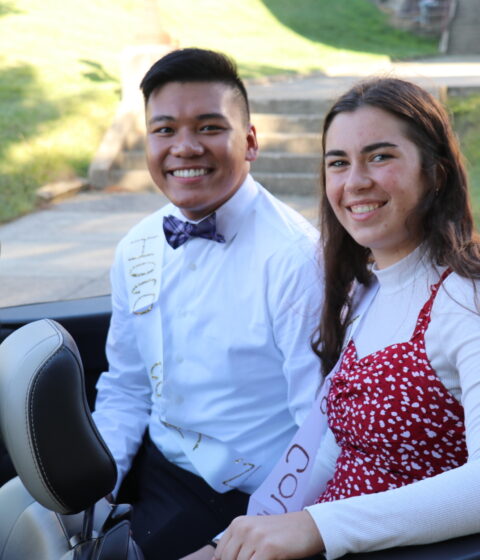 “Justin has been a joyful asset to our school, especially during the time of pandemic uncertainty. Even behind a mask and socially distanced Justin maintained his love for his classmates and his enthusiasm for his school. He has worked to continue to find joy and happiness in his high school experience and in his classmates regardless of what a global pandemic has thrown at him. He is a face I can always count on to be engaged, to be ready for a challenge and to smile through it all. It is students like Justin who have made teaching and going to school these last two years still feel as close to normal as possible.”