Traveling abroad is something most people plan. It can take years to save the money and really think about where you want to go and what you want to do. When Jonathan '17 opened up his college acceptance letter, traveling abroad became a reality that he did not get to plan. Jonathan has been accepted to New York University's CORE Program for his freshman year of college. He will have the opportunity to live and study at the London campus for his first year of college. "I was just chosen. When I applied to NYU I was expecting to be living in New York, but I was pleasantly surprised to find out that I will be in England for my first year of college." According to Jonathan's acceptance letter, "The CORE program is a rigorous two-year curriculum that is truly interdisciplinary. Faculty attention and small class-sizes (typically fewer than 20) are its hallmarks." The goal of the CORE program is to give students a wide range of experience and then let them decide after 2-years if they want to continue in the Global Liberal Studies or declare an major. At this time, Jonathan has his eyes set on either Political Science or Law.

Jonathan's high school career wasn't spent entirely at Roger Bacon. He transferred his sophomore year and was able to get involved in Cross Country and Academic Team. Since his sophomore year his time was spent finding opportunities in the community to keep busy. Jonathan has volunteered at inner city schools, was a member of a Student Suicide Prevention council and interned with both Democrats and Republicans. "I interned with Senator Rob Portman and Mayor John Cranley. I was able to see both sides and learn how similar Democrats and Republicans really are. Both parties are looking to work hard, be successful and be the voice of the people." Jonathan has learned from these experiences and it has driven him to someday hopefully be in these people's shoes.

As Jonathan heads off to bigger things, he recognizes his time spent at Roger Bacon has prepared him for the real world. "I feel that Roger Bacon has prepared me for college and beyond. Taking four AP classes and having fantastic teachers and staff who push me, even when I may be hard to work with from time to time, has been a blessing." Ms. Magliocco says, "It’s hard to put into words my thoughts about Jonathan Calderon. He is definitely a “One of a Kind” type of person. His smile can light up a room and I often find myself laughing when I interact with him. His joyous and lighthearted spirit make it hard to be irritated with him when he comes to me with his zillionth last minute request for something. I will definitely miss some of our zanier conversations and I wish him well as he moves onto college."

Ms. Pacak, Jonathan's AP Government Teacher, recognizes that his hard work in the classroom is going to pay off in the future. "Jonathan is one of the most ambitious students in my classroom. He works hard in order to keep his grades at a higher standard than any other Roger Bacon student. With that kind of drive, he’ll be extremely successful in life." 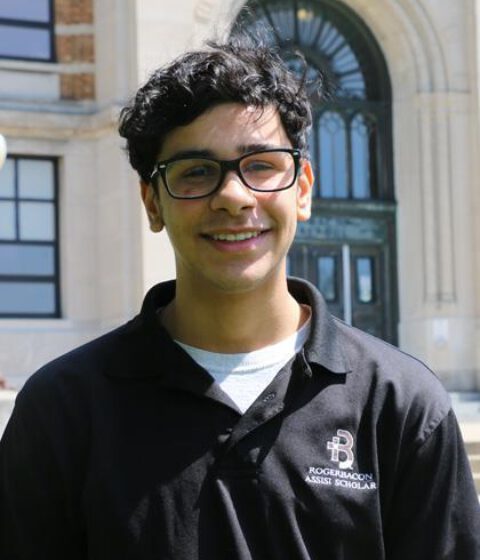 “I feel that Roger Bacon has prepared me for college and beyond.”