When you see Jessica '17 walking the halls at Roger Bacon, she is usually smiling and has her hand up waiting for a high five. Jess even goes out of her way to give people fist bumps and high fives because she likes to make other people happy. "I love to tell people they are awesome. Making other people happy, makes my day."Over the past three years, Jess has made a lot of people happy, her positive attitude is recognized by anyone who meets her.Mr. Zlatic appreciates Jess's spirit, "Jessica is a model of hard work and positivity. She is simply a kind person who espouses the spirit of Saint Francis in her humility."

Jessica not only is positive but as Mr. Zlatic stated, hard working. During her time at Roger Bacon, Jess has been involved in Planeteers, basketball, track and field and when she was cut from basketball, went out for wrestling. "I felt like I wanted to stay involved and in shape for track. Wrestling was a lot of fun and I won a duel, so that is great!" To be the only girl on the team did not bother Jess, but was just another way to work hard and have fun. Her hard work has also paid off in the classroom. Jess will be heading to Xavier University next fall and is interested in Digital Innovation, Film and Television. "I really like being behind the scenes. This year I was able to help with ICRC at the girls basketball games and it peaked my interest." Jess hopes to somehow be able to get involved with either their basketball or track and field programs, she likes to be a team player. According to Ms. Maksymiak, Jess is someone you'd want on your team, " Jessie is a model of perseverance; she never lets an obstacle or a challenge prevent her from reaching her goals. Instead she works harder. If I had a task to accomplish, she is the kind of person I would want on my team."

Reflecting on her high school career, Jess feels that Roger Bacon was exactly where she was supposed to be. After joining the Spartan Army, she found out that her cousin went to RB and it just confirmed her choice was right. "I love this place. I don't want to leave. We have great students who really appreciate their teachers and I love the diversity." Jess continues, "I can't believe I am a senior.It is going to be hard to leave the place I've called home for the last few years." Now, after her years here, her younger brothers want to follow in her footsteps. "If it wasn't for my 8th grade teacher at Resurrection School, I wouldn't have really known about Roger Bacon. Once I visited, I knew this was the place for me." Ten years from now, Jess hopes she remembers how much Roger Bacon impacted her life. From great friendships to the Franciscan values, Jess is very appreciative of her education at Roger Bacon and hopes to never forget it. 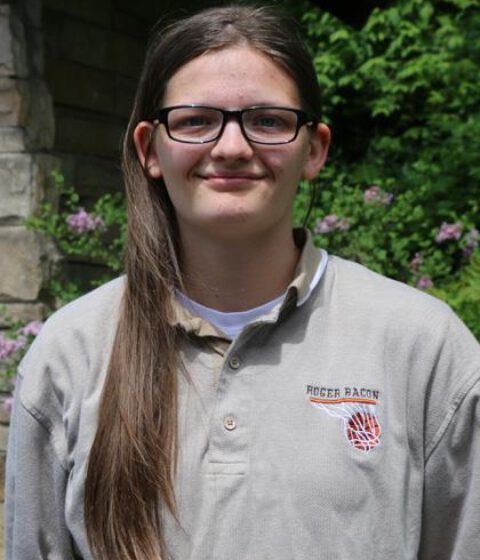