Like many of Roger Bacon’s current students, freshman Gabriella “Gabbi” Bose fell in love with her school on her shadow day. “Right away, it reminded me a lot of my grade school, Nativity,” says Gabbi. “It was just so welcoming. Everyone was so friendly, and even though I was just an eighth grader, the students here were going out of their way to make me feel welcomed and like I was already home. I knew then that Roger Bacon was the right place for me.”

Despite only knowing one of two students who also chose Roger Bacon, Gabbi knew what sort of experience awaited her. “I definitely have already made friends that I know I will have forever. Between volleyball and freshman orientation, I felt like had a ton of friends before school even started. Even the upperclassmen have gone out of their way to make us all feel welcomed,” shares Gabbi. “I’ve also made friends I wouldn’t have made at another school. Some are because we are coed, and some are because there is so much diversity at Roger Bacon. I knew this was something that I wanted for myself, to have the experience of meeting different types of people and become friends. Roger Bacon is definitely a place to do this.”

Among the freshman year highlights for Gabbi was helping to lead a successful freshman volleyball season while getting to watch the varsity team finish state-runner-up. Off the court, Gabbi has also embraced the academic opportunities that come with being a freshman honors student. As Gabbi states, “The teachers are awesome here. The honors program was a big draw for me, and to become an Assisi scholar and take the trip to Italy definitely impacted my decision. It showed me that hard work can have great results. I love the honors program, and I love my teachers, especially Mr. Hetzer and Mr. Kathman. The teachers here are not just teaching content, they get to know you personally, and make sure you really understand what they are teaching. It makes class a lot more fun.”

Gabbi also has enjoyed the influence of the Franciscans. “I love that every day the Franciscans are always in such a good mood and will always talk to you. They’re always positive and willing to have a conversation even if it’s just a simple ‘Hi’ in the hallway to brighten your day,” says Gabbi.

Despite being just a freshman, Gabbi has already started looking to the future a bit. “I definitely plan on going to college and I want to study something in the medical field, like maybe dermatology,” shares Gabbi. “I also would like to go to college somewhere in North Carolina, like to UNC, even though my family are Duke fans!”

With her freshman year at the halfway point, Gabbi looks forward to finishing the year strong academically, continuing to support Roger Bacon athletic teams, as well as trying her hand at a new sport herself this spring. “Another benefit of a small school is there is plenty of space to try new things, so I think I may play softball, or maybe lacrosse,” says Gabbi.

Reflecting on the first semester of her Roger Bacon experience, Gabbi is quick to point out one of her favorite parts of her new home – being herself. “I definitely feel I like I can be myself at Roger Bacon and I won’t get judged for who I am,” states Gabbi. “That is one of the main things I love so much about RB. I can be myself and do my own thing without worrying about the opinions of others. Everyone is allowed to have their own interests and hobbies and is accepted. You never have to worry about being judged. That is just Roger Bacon.” 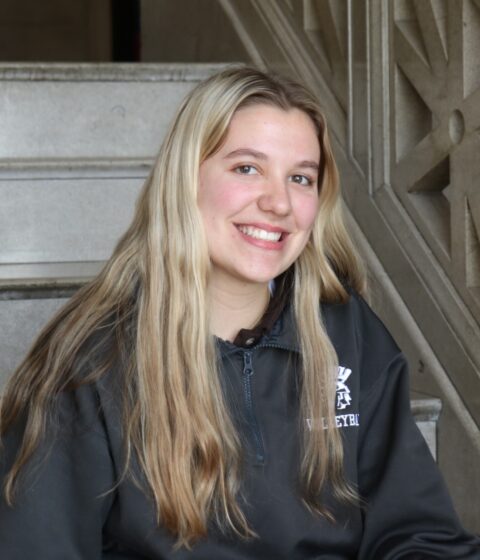 “Gabbi is such a delight to have in class. Without asking, I can always count on her to help mediate the class or at least certain groups – she is very well informed with social dynamics as well as responsibilities. Gabbi is bubbly-talkative, but does an amazing job at understanding situations & helping classmates. Her presence in my class will be missed in the coming years, but I know her future teachers have someone to count on.”