Whether it’s on the Football field at Bron Bacevich Stadium or the stage in the Carol Dauwe Fine Arts Center, Dimitrius Ward ‘20 is a familiar face that you will see in both of those settings. He is currently preparing for our Spring Musical, Godspell. It is a show composed of various musical parables from the Gospel According to Matthew and portrayed in a humorous way. The character that Dimitrius is portraying is very energetic and plays around a lot. The song that he is featured in, "We Beseech Thee", is the final upbeat song in the show bringing the whole company together to have their last blast of fun. He is going to be dressed as Elton John in the way of extravagant and colorful clothing. Dimitrius was chosen for this role to stretch his vocal talents and it fits his personality well! This isn’t one of his first appearances on stage though. Last year, he was one of the lead acts, Gaston, in our Spring Musical, Beauty and the Beast. Being picked as lead characters comes as a shock to him. He said a few years ago, he never would have pictured himself into theatre, it was something he never even thought about, but has a passion for now.

His freshman year, they were preparing to put on the play, Oklahoma and thought about auditioning, but unfortunately missed them. He never thought more about it until Theatre Director, Catie Murray approached him and asked him to perform in the play. This is what kicked off his acting career and since then, he has enjoyed every second of it. According to Ms. Catie Murray, “Dimitrius is always hard working, kind and polite. He is a friend to all and treats everyone fairly. Dimitrius is heavily involved in the Drama Guild, plays tuba in the Concert Band, is a bass in the Chamber Choir all while being a member of the football team. He thoroughly enjoys The Arts and being on stage. His smile is contagious and he brings humor into every aspect of the process. He puts 100% effort into everything that he does.”

It is truly unique and special that not only is he into theatre, but is also a student-athlete and member of the Spartan Football Team. He said it is definitely two polar opposites, but you just find a way to make it work and he’s fortunate enough that he’s able to participate in both. Being able to act and play football is something that really defines Roger Bacon as a school. Head Football coach, Mike Blaut can also agree with how special it is. “Dimitrius is a very special student-athlete. He is a very good football player, achieving first team All GCL defensive lineman as a junior as well as being an important part of the Drama Department. His singing voice is incredible and has earned him the nickname "The Preacher" with us. He is a very dedicated hard working football player and devotes as much time to the Drama Department which is a unique quality for a high school student.”

One of the main reasons he chose to come to Roger Bacon was because of the people it is filled with. One of his favorite reasons of being here are the teachers. “I have good relationships with all of them and they know me on a personal and first-name basis.” This is just another reason why this place is so special. It is evident that Dimitrius has succeeded in many ways and has taken advantage of all of the opportunities that have been thrown his way so far.

Although he is only a junior, he has already given life after graduation a thought, and is considering pursuing his acting career and possibly attending a Drama School. We are thrilled to watch him perform in Godspell this upcoming spring and continue to watch him succeed both athletically and on the stage. 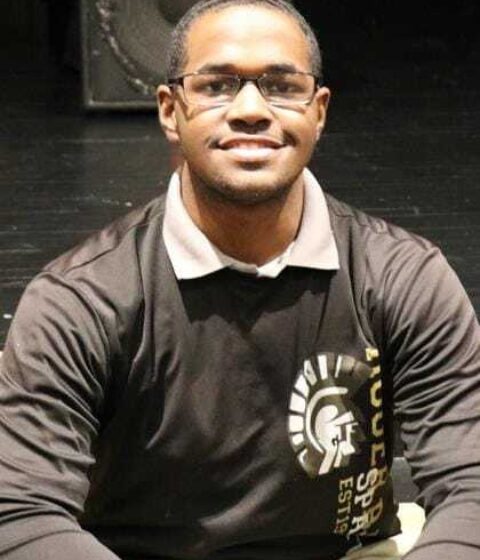 “Dimitrius is a prime example of the number of things you can do at Roger Bacon. He is both an active member in Athletics AND Fine Arts. You can find him on the field or the stage – and his talents are as big as his smile! Whether it is playing the villain Gaston in last year’s “Beauty and the Beast”, lifting with his football family, stepping up and learning tuba for Concert Band (including taking a solo at this year’s March Concert and participating in the Catholic Honor Band), or singing in the Chamber Choir – he does so with energy, dedication, and respect. He is a hard worker, friendly to all of his classmates, and really exemplifies the Franciscan Value of Humility in what he achieves.”