There are a lot of students who have siblings in the building at Roger Bacon. Craig ’18 and previous Face of RB, Shanoah ’20 are a couple of great students and the epitome of being brother and sister. Within the first week of school this year, Craig was passing out bracelets for Sickle Cell Awareness. “September is Sickle Cell Awareness Month, and my sister, Shanoah, has Sickle Cell Disease. Only 2 out of 10 people know what Sickle Cell is and are able to tell you about it. It is an underrated deadly disease and there needs to be more awareness.” Craig said everyone at Roger Bacon wanted a bracelet, “The people here are so accepting and want to learn more about Sickle Cell.” Even though his family has had to deal with the hardships of sickle cell disease, Shanoah and Craig are always seen around campus with smiles on their faces, “You smile and pass it along, that person then smiles and makes someone else’s day. God gave us Shanoah for a reason, and we are going to build awareness about this disease, with smiles on our faces.”

When asking Craig about his experience at Roger Bacon, he feels that it has prepared him to move forward to greater things. “Next year I plan to go to Heidelberg University, play basketball, major in Sports Medicine and minor in Communications.” When asked why the minor Craig says, “I’ve always wanted to be a sportscaster and I am pretty good at talking to people. I need a fall back option –but I am really interested in how the body works, especially as an athlete, I just want to keep my options open.” Craig, a member of the 2017 State Runner-Up Basketball team, is just as excited for this upcoming season, “We left everything we had on that court last year, and we are still proud of that. We may have lost some of our talent but that doesn’t mean we can’t get back there. We have to trust the system, trust that our coach will push us just as hard – and we practiced against our seniors everyday, so we know what works.” This year, there will be five seniors on the squad according to Craig – and with the step up to Division II, Craig as well as his teammates believe they can make big things happen again this season.

Basketball may have been what originally attracted Craig to Roger Bacon, but after his shadow visit as an 8th grader he felt it was home. “The classes are much smaller than Winton Woods. At Winton Woods, our classes were 25-30 – here they are 12-19 students. It is just smaller, and a more welcoming environment.” The welcoming environment is in part because of students like Craig. This year, he was a selected to be a Senior Leader, and he greeted the freshmen with his great smile and warm personality. According to his flex bell teacher and Senior Leader moderator, Kate Romolo, “Craig is a great leader for our school. He exemplifies the example of a servant leader, always putting others first. He always has a smile on his face and a word of hello or encouragement for all who encounter him. He is a great kid who has never met a stranger and embodies the value of family here at RB.”

Mrs. Karle, who nominated Craig to be our Face of RB, knows how important he is to our family:
“I nominated Craig because of his positive spirit and his passion for family. When I had Craig in class, his little sister Shanoah shadowed. He was so proud to show her to everyone- he just glowed when he introduced her. It melted my heart to see how much he loved her.This past August, I saw Craig interacting with the freshmen during their orientation, and he had that same proud, inclusive attitude. He was fun and silly and inviting, letting his freshmen know that he was there to help them become part of the RB family. That’s when I felt that he should be a Face of RB. RB is a family- whether you graduated in 1931, 1962, 1985, 2006, or 2018, and as an alum, I am proud to call Craig part of my family." 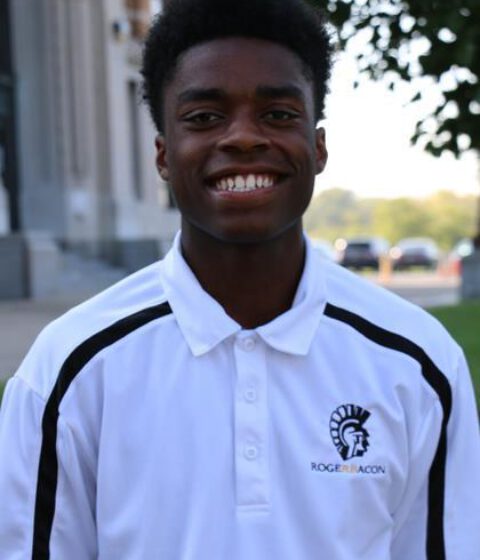