Brother Gene Mayer OFM, describes himself as an ‘angry perfectionist’ and that his best skill is organization. Between the years of 1974 – 1996, Br. Gene taught Old Testament, Morality, and Marriage courses. He also was the Student Senate Moderator for five years as well as the Athletic Director where his organizational skills came into play most. “I don’t know anything about sports, but I am good at organization. I’m happy if a coach would turn off what they turned on, locked what they unlocked and cleaned up after themselves. I would never question a coach about their sport.” Rick Sollmann first met Br. Gene during his time as Athletic Director, “Brother Gene is definitely ‘one of a kind’ and a true gift to Roger Bacon. I met Brother Gene when my daughter was a student at RB from 1992-1996 and he served as Athletic Director. He has been dedicated to our students for many years and is willing to do many of the chores which are necessary and not many people are willing to perform.” Today, Br. Gene has been back at Roger Bacon for four years and works in the Advancement Office. Junior, Haley Hoffman helps Br. Gene with Bacon Bucks, one of the many things Br. Gene has a hand in, “Br. Gene is hard-working, even though students may not see him around the school often. He does a lot for the school behind the scenes. He is a guy whose main goal is to help the lives of others. Just from helping him with the Bacon Bucks, it has drawn my attention to how much he does for us to be able to go to Roger Bacon. I look up to him.”

Br. Gene was here in 1981 when the Boys’ Basketball team won State, he was here when girls joined the Roger Bacon community, and was also here as the number of Friars diminished. “An essential part of the Franciscan charism is the fraternity seen between the Friars. In 1974 when I first started at Roger Bacon, there were 15 of us on staff. Students were able to see us interacting together between classes, and I believe that is more important than the book learning.” Although the number of Friars are not as great as in years past, the four Franciscans we currently have on staff exude the value of Fraternity, especially Br. Gene. Principal Steve Schad witnessed Br. Gene’s hospitality at Open House this Fall, “For two hours, Br. Gene stood and greeted everyone who came to our Open House -- it made a great impression. For those who know Br. Gene, he sometimes can appear gruff, however, not only is that part of his charm but he is one of the most welcoming and humble Friars at Roger Bacon."

Charm is something very specific to each person and their personality. Br. Gene’s charm has been described as: Loving, Endearing, Honest (sometimes brutally honest), Unique, Insightful and Humorous. When asked to reflect on the years spent at Roger Bacon and even pick what times he felt were his favorite (whether it be the 70's, 80's, 90's or today) he said, “It’s hard to separate the 22 years I spent in the classroom and athletic office, but I feel that Roger Bacon has moved in a very positive direction. Roger Bacon was a good school, a great school, but something happened in the 18 years I was gone that diminished the esteem of our community. I feel that has changed over the last few years. It is a great time to be at Roger Bacon. I love this place and gave my life to this place for 22 years, it is comforting to be here again in a kinder and gentler RB.”

Current Math teacher Dave Kathman speaks highly of our newest Face of RB, “Bro. Gene is an RB icon for everyone at RB during the 70’s and 80’s, and now. EVERYONE recognizes Bro. Gene. Not because he resembles Fred Flintstone, it is his overwhelming charm that students remember. He is a perfectionist in every sense of the word and it is very evident in his meaningful contributions over his many years at RB. I can say with 100% confidence that every student at RB who knows Bro. Gene, respects him a great deal. He’s honest (sometimes too honest), a work horse, a superior decorator, and a wonderful Franciscan. He was, and still is, a great mentor to me and I will always take his advice to heart. I love Bro. Gene like he’s my real brother because he has always treated me as if I were his family.” 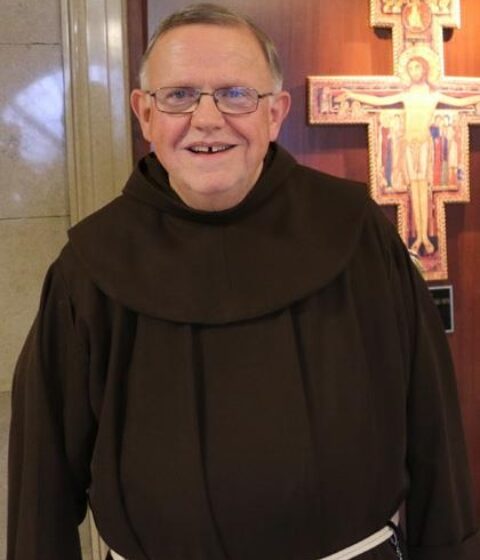 “My sophomore service day two years ago was when I first met Br. Gene. On that service day I grew to like Br. Gene a lot due to his great personality and the jokes he kept cracking. After that day, I always say hey to Br. Gene if I see him in the school or anywhere else. Not many people know how hard Br. Gene constantly works throughout the school -- whether it is setting up events such as mass in the Fine Arts Center or dealing with paperwork. I'm grateful to have met the wise and great guy that Brother Gene is and I'll definitely miss him and his jokes next year.”