When Anna ‘20 moved from Florida to Cincinnati last year, she was not sure what to expect. "Those first few weeks were really terrifying!" she said. "I had to leave behind my old school and all of my friends." Anna transferred to Roger Bacon as a junior, and she worried about whether she would fit in at her new school--whether the students at RB would accept her, or just treat her like the "new girl." Very quickly, Anna's friendly personality, enthusiasm, and involvement helped her feel as though she had been part of the Roger Bacon family for years.

Moving to Cincinnati--and transferring to Roger Bacon--brought both good and bad surprises for Anna. "I still can't get used to the snow here," she insists, "and, sorry, but I still don't like Skyline!" More significantly, though, Anna found a friendly, welcoming community at RB that she had not expected. She explained, "In Florida, there were over 1500 students in my sophomore class! There is kind of an ‘everyone for themselves’ mentality in high school. It always felt like my classmates and I were competing against each other, rather than working together. Here, it’s different. Roger Bacon is a lot smaller and more close-knit. People aren’t always worried about trying to get ahead. Instead, everyone looks out for each other."

This summer, Anna spent nine days at a medical camp at the University of Maryland, along with 200 other high schoolers from across the country. At the camp, Anna had the opportunity to witness a live surgery, tour hospitals, learn how to suture wounds, and more. “My ultimate career goal is to become a surgeon in the military, and this camp helped me learn a lot about what the medical field is really like,” Anna said.

Anna is looking forward to getting even more involved in her second and final year at RB. She was selected as a senior leader, specifically focused on helping new transfer students successfully transition to life at Roger Bacon. Anna will be one of the first people the transfer students meet at orientation, and she will check in with them throughout the school year to make sure they are adjusting to life at a new school, just like she did. “I know how difficult it can be to move to a new school in the middle of high school,” Anna said. “I’m looking forward to helping make Roger Bacon more welcoming for all of our transfer students.”

Roger Bacon is made up of many faces, different faces. We hope to showcase as wide a range of our Spartans as possible. If you would like to nominate a Spartan, past or present, to be featured as a Face of RB please click here. 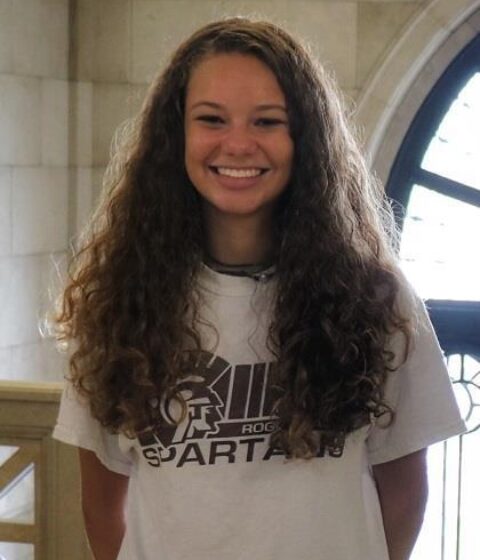 “Anna has a super upbeat, infectious personality. She seems to always brighten folks' day. The energy she brought to class everyday made her a joy to teach.”