Freshman Amanda Strode was determined to find the right “fit” for herself when choosing a high school. As an eighth grader at Nativity, her parents gave her the power choose her high school, and Amanda not only took advantage of the three shadow days that the Archdiocese allows, she took two extra to make sure she saw what was available. “I shadowed at five schools. Three single-sex schools, including the school my older sister goes to, and another co-ed school, in addition to Roger Bacon,” says Amanda. When it came time to make her choice, Amanda felt says it was obvious. Says Amanda, “Of all of the schools I looked at, I really saw Roger Bacon was the best environment. Some of the other schools, the students didn’t seem that happy to be there, or they seemed stressed out. Roger Bacon has the best combination of academics, as well as the people just being so nice and supportive, and HAPPY. It felt like home, even on my shadow day. I remember being in Mr. Kathman’s Algebra class with my shadow host, and students were really enjoying class. They were learning, but also laughing and having fun doing it. I knew this was the place for me.”

As her freshman year starts to wind down, Amanda couldn’t be happier with her choice. ‘It has exceeded even my highest expectations,” says Amanda, “I have had the best time. I love my classes and teachers, I love going to dances and games, and playing high school soccer, and of course I love the family environment here.” She also had found a favorite teacher in Ms. Kelly Krebs, ’07, who she had for Freshman Seminar. “Ms. Krebs has a way of talking to us during class that just makes it fun and interesting,” states Amanda.

One of the things Amanda was most looking forward to as a freshman was the thrill of playing high school soccer. Amanda quickly established herself as one of the foundational players for the program. She also is very active in service opportunities, such as Bacon Buddies and Chemo Pax, in which students assemble care packages for patients undergoing chemotherapy. Amanda also plays club soccer outside of school, and enjoys hiking trips with her family, her favorite being a trip to Zion National Park in Utah.

Among the things that have stood out most to her about Roger Bacon, Amanda says it is that supportive, family environment that first drew her to the school. Shares Amanda, “The sense of community here is what I love most about Roger Bacon. The students here support and encourage each other. They show up at all of the games and clubs to show support for each other, and there is overwhelming encouragement when students try new things.”

That support extends to alumni and friends of Roger Bacon, as Amanda learned with her first Homecoming parade. “I was on the soccer float, and it was awesome to be there with my teammates, who are so friendly and supportive, and then to see all of the alumni and people who came out to support the parade, it was just an awesome feeling,” says Amanda.

Although just a freshman, Amanda has started to think about what life beyond Roger Bacon may look like from an academic perspective, as Amanda shares, “I am good at math, and I think engineering would be really interesting and something I might like to do.

As for her advice to those students who are set to embark on choosing their own high school, Amanda has the following advice. “When you shadow, really look at the students. Try to see things from their perspective, and how they treat each other, and talk to each other, and if they are happy,” says Amanda. “At Roger Bacon, you can just feel how happy everyone is. It is obvious that the students it here, and you will too!” 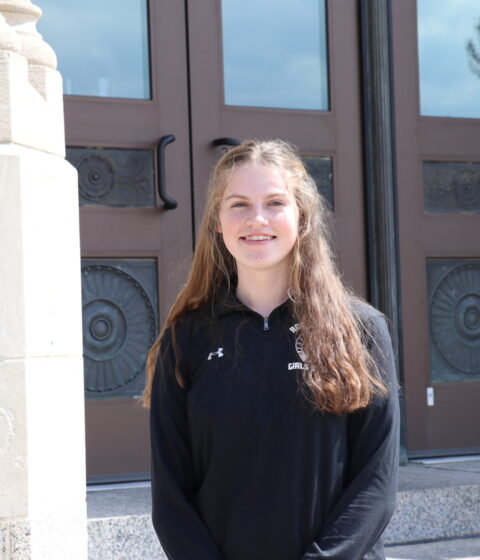 “I loved having Amanda in class! She was part of my Freshmen Seminar class which has a few occurrences of public speaking, and even though she probably loathed it, she always rocked it in front of class. I know how scary it is to talk in front of your peers, but Amanda persevered and showed that Spartan Courage!”