Junior Alex Hinsey remembers his shadow day well. Then a St. Gabriel eighth grader, he distinctly recalls walking the halls of Roger Bacon with his host that day, feeling not like a shadow, but already like a Spartan. “I just remember, I never felt like a shadow. I felt like I was already a student here, already part of this family,” shares Alex. “I could feel the embrace of the Bacon family and the strong sense of community.” After shadowing at several single-sex schools, Alex realized just how unique this feeling of family and community was, and realized Roger Bacon was an easy decision.

Alex’s favorite part of Roger Bacon is that sense of community, especially the strong bond he has developed with this teachers. He credits the small class sizes, along with teachers who go above and beyond to get to know each student. Alex feels that his teachers take time to really learn about each student, who they are, and what will make them successful. “I love connecting with my teachers and the staff at Roger Bacon. I can honestly say I have a real relationship with them, and I can feel that they care about me as a person. They always say ‘Hi’ to you in the hallways. You know you can always go to them if you have a question about school work, or just life. They are not just preparing you to do well academically, but also preparing you for life,” shares Alex. His favorite teacher is math teacher Eric Neuhaus, who Alex says “is not only a great teacher, but I can honestly say has become a real friend.”

Alex balances his academic workload by staying busy outside of school. He is one of the leaders of a resurgent boys' swim team, and also runs track. He enjoys his job as a lifeguard outside of school hours, as well as volunteering at his church, where his father is the Pastor. Alex also enjoys playing basketball in his free time. “Basketball is just a fun way to escape from the daily stress of my academic load and activities. It lets me just forget about it all for a little while,” says Alex.

An interesting fact many don’t know about Alex is that he was adopted as an infant. Another interesting fact is his adoptive father blessed him by giving him his name - Alex’s full name is Dorrien Alex Hinsey, JR. However, as Alex shares, “I had an elementary school teacher that had difficulty with ‘Dorrien’ so my Mom decided to just go with Alex to make it easier for them. It stuck, and the rest is history.”

When asked what makes Roger Bacon so special, Alex quickly points out something he noticed back on his shadow day – the Roger Bacon spirit. “I just don’t see other schools that have the same spirit that Roger Bacon does. The students that are here really buy in to what Roger Bacon is all about. They support each other, from basketball games, to swim meets, to the plays. They show up at EVERYTHING, and you know that the day after an event whether you won or lost, your friends at Roger Bacon will still be showing you love and support,” shares Alex.

As his junior years winds down, Alex is looking forward to a senior year that he hopes will be at least a little more normal, with the ability to attend move events, and show more support for his fellow students. He also is looking to college, where he plans to continue his swimming career. “U.C. and Miami have both reached out about me attending, and swimming, and I like both of them. I am trying to decide what to study. I like business and engineering, so that may play a role in where I choose to go,” says Alex.

Reflecting on his own shadow day three years ago, what advice would Alex have for those eighth graders looking to make a high school decision? “I would tell them that when you look at Roger Bacon, you are getting a family. It is a school where you will always have a friend. Where someone will always be there for you. Where everyone, from the teachers and staff, to the students around you, are pushing you to be your best, at school and at life,” says Alex. “They want to know who you really are, and then celebrate who that person is. I just think everyone should get to experience how special Roger Bacon is.” 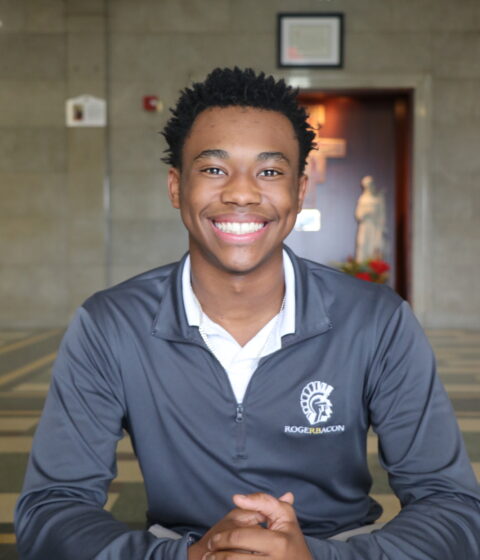 “Alex is a super upbeat kid with an infectious positive attitude. He is a joy to have in class or just speak with in the hallways.”