An unassuming student, Adam '17 is someone who may fly under the radar if he wasn't at Roger Bacon. According to his friend and classmate Renee Finan, " He is kind to everyone -- charismatic and enthusiastic in everything he does. I think he truly exemplifies the ideal Roger Bacon student." Adam, who is continuing his family legacy had some great role models. "My parents are my biggest role models and they are the people I look up to for how to be a leader." Adam's parents, Tom '83 and Joan '83 (OLA), have given him the resources and support he needs to be successful. "My parents have always pushed me. My dad coaches girls soccer at Roger Bacon and it was his idea for me to continue playing at the next level." So, Adam started looking to play in college. It was always in the back of his mind, but he was unsure he could actually achieve it. He was voted to be a captain for the soccer team and he also helped them to the Regional Finals this past fall. "I always had it in my mind, but it was my Dad who kept pushing me." Adam has decided to continue his academic and athletic career at Wilmington College. When asked why Wilmington College, Adam shrugged and said, "I like the small atmosphere, I didn't want to be just another person in the crowd at a big school. I wanted to have a face and a name, just like I do at Roger Bacon."

In his senior year, the student who prides himself on having good morals and a good attitude, knew he always wanted to be a leader and stepped out of his comfort zone. He became a Kairos leader and joined his classmates on a mission trip to New Orleans. Renee says it best, "He is a silent leader, as demonstrated by his leadership at K65, and he has shown his strong faith, determination, and good attitude through the New Orleans mission trip." His determination was needed in New Orleans. Adam said it was a lot of work, but it was rewarding and very impactful. Adam and a group of other Spartans rehabbed a house that was damaged by hurricane Katrina. He learned how to lay tile, and even though it was tedious and difficult, the reaction from the family was worth it. "They were overjoyed and beyond thankful that we were there. It was a very humbling experience."

After an exceptional Kairos, Adam wanted to share that experience with his other classmates. "I was extremely motivated after my retreat. I had such a close connection to the people in my group and I was inspired to share that with my other classmates. It really helped me appreciate Roger Bacon more and it brought me closer to God in a way that has motivated me to be the leader I have always wanted to be." Ms. Flading, who was Adam's prayer partner on K65 says, "Adam was the leader who helped his classmates through certain things but was never too overbearing. He genuinely cared for everyone in his group and you could see that. He did a great job of dealing with the stress that can come along with being in charge of a group and speaking in front of a crowd. His ability to make people laugh with a one-liner here or there was refreshing and I am very happy I got to know him better before he graduated."

Adam's caring heart is not only seen by his peers but his favorite teacher, Mrs. Adams as well. "Adam is a true Spartan--hard working, dedicated, kind, and unassuming. I felt blessed to be his French teacher for three years, and I wish him all the best as he moves forward in his life. My best advice for Adam is to remember always what we learned when we read Le Petit Prince in French 3: "On ne voit bien qu'avec le coeur. L'essentiel est invisible pour les yeux. (It is only with the heart that one can see rightly; what is essential is invisible to the eye). I know that he agrees with this life truth!" 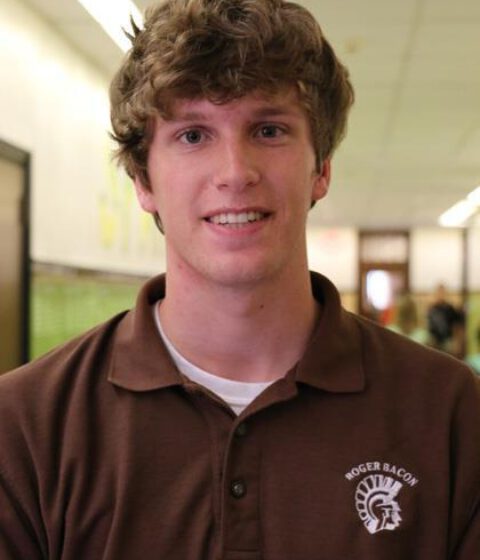 “I didn't want to be just another person in the crowd at a big school. I wanted to have a face and a name, just like I do at Roger Bacon.”