A common theme for many Roger Bacon students is how they fell in love with the place we call home when they least expected it. For Timyone Andrew, ’23, this is exactly what happened to him. As an eighth grader at Clark Montessori, Timyone thought he had his list narrowed down to two schools. “I always assumed I was probably going to LaSalle or Clark, and didn’t know anything about Roger Bacon,” he shares.

This all changed when his Tower Titans football team moved their practice location to Roger Bacon’s Bron Bacevich Memorial Stadium for his eighth grade season, and he started to learn about this special school in the heart of the city.

“I looked around, saw how incredible it looked. Then some of my friends on the team decided to do a shadow day, so I set one up. It was awesome. I just knew this was the place I could get great academics, and do everything I wanted to athletically, while being in a smaller, family environment,” he says. In fact, several of his teammates shared the sentiment and ended up choosing RB as well.

Timyone has made his mark at Roger Bacon since enrolling, making friends throughout the school, working hard on his academics, and pushing himself athletically, achieving the rare feat of starting a varsity football game last season as just a freshman. He also has found a connection to the service oriented nature of Roger Bacon, which he carries to his life outside of school. “My mom and I like to go volunteer a soup kitchen up in Clifton. It just feels good to give back, and makes me more thankful for all of the gifts I have been given,” Timyone shares.

When he isn’t playing football or studying, Timyone likes to work out, including some gymnastics, which he got involved in as an alternative to traditional workouts. He also takes any opportunity he has to help others, including sharing with up-and-coming students what Roger Bacon means to him, and why they, too, should consider it. As Timyone explains, “I am always talking about Roger Bacon, and telling anyone who will listen that this place is special, and different than any other school.”

Although he still has plenty of time to think about life beyond Roger Bacon, Timyone is starting to think about college, hoping to take his athletic career to the next level, while looking at majors focused on sport science, in hopes of being a personal trainer, or open his own gym. His experience at Roger Bacon even has him thinking about coaching.

“I’ve thought about being a coach, and how fun it would be to come back to a place like Roger Bacon, and give back to students like me, that would be awesome.” 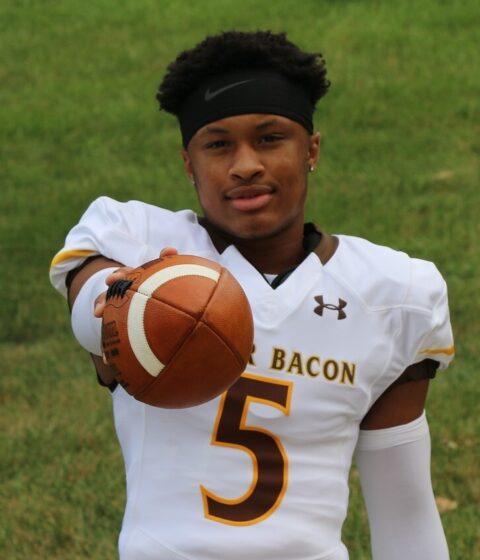 “Timyone is one of the most enjoyable players we have had in a long time. Beyond his exceptional athletic abilities, he is a very conscientious player always thinking of the team, teammates and Roger Bacon first. He is always looking for ways to improve everything around him. His positive energy is infectious and greatly appreciated by the coaches! ﻿”