English Teacher Mary Christoff not only wasn’t sure about teaching at a Catholic high school, she wasn’t even sure she wanted to be a teacher.

After completing her undergraduate degree in English Literature at the University of Cincinnati and unsure if she wanted to be a teacher, she took a year off to work as a nanny, including volunteering at schools for the children she cared for. It brought her to the realization that she needed to be around, and working with, kids. So she went back to Xavier University to complete her Masters of Education. It was at XU she saw a job posting that would change her life. Roger Bacon was looking for an English teacher. As Mary says, “My plan was to get my degree and then head west. I have siblings and family out west, so that was always my go-to reason, to be with family. I inquired about the interview at Roger Bacon because I thought it would just be good interview practice.”

During her interview with Principal Steve Schad, she remembers fondly how much he raved about the wonderful students at Roger Bacon, and the incredible things they did each day. “Mr. Schad kept talking about how great his kids were, and how special they made Roger Bacon. I thought he had to be exaggerating,” she says, “it just seemed liked it couldn’t be real.” The next morning, she was offered the job, but before accepting, she requested to sit in a few classes to help make her decision. That Friday, after sitting through the first two bells, and interacting with students firsthand, she marched to Mr. Schad’s office and told him “I’m in.”

Even after being so impressed early on, it took her some time to realize the students at Roger Bacon were not “putting on a show” and were as genuine as the Franciscan values they represent. As Mary says, “Roger Bacon wasn’t necessarily part of my original plan, but I believe me finding my way here was out of my hands. I was lead here, for some reason, and it changed my life.”

In her short time at Roger Bacon, Mary has earned great love and affection from her students. Much of this stems from her belief that she isn’t just at RB to teach English, but to make a difference in each of the lives she gets to touch. “I wonder sometimes if I hadn’t ended up at Roger Bacon, if I would have such an overwhelming sense of purpose, like I do here every day. I love not only getting to teach these students about English, but also about life. I had a difficult upbringing, and I can personally relate to what some of our students are doing through. I try to not be just a teacher, but someone who gives them something extra. To make their day better. To let them know how much I care about them, because they have become my family,” she says.

“Miss Christoff is a breath of fresh air and a ball of energy. She is one of the most positive people I know and brings a great deal of energy and enthusiasm to the Spartan family,” states RB Principal Steve Schad.

Morgan Snyder '22 shares, "Miss Christoff always reflects her saying "for the kids." She truly prioritizes each individual student and ensures we know how loved and worthy we are. Her room is a sanctuary of good vibes!"

Miss Christoff has had many highlights with students here at Roger Bacon, such as when she built a complex lesson plan that ended up being flawed, only to have her first bell take it upon themselves to help her work it out so she could implement for other classes. However, one event stands out as an evidence of what these students at Roger Bacon have meant to her, and what she has meant to them.

After disclosing to one of her classes her upbringing, and the students sensed how difficult Christmas time was for her, the class took it upon themselves to make her a “family album” complete with photos of each of them growing up, as well as letters from each student stating how much she means to them. “I couldn’t believe they took the time to make this album. To recognize on their own how difficult Christmas was for me, and go out of their way to try and correct it, to make it better for me. It spoke volumes about how amazing these kids really are. I took the album to my family Christmas and showed it off, and I keep it on my table at home and look at it all the time. These students really are my family, a family I didn’t know I needed.” 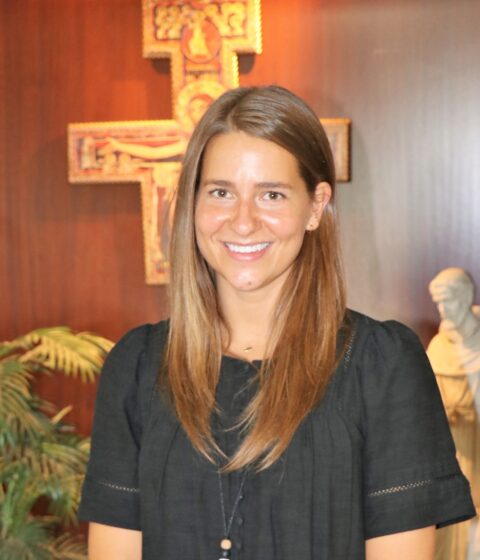 “Miss Christoff is by far one of the most genuine, caring teachers I’ve ever had; she always goes above and beyond for her students and checks in on them when she notices someone is struggling. I could be having the worst day, but sixth bell was always the perfect place to recollect myself and find a way to end the day on a positive note. I hope she knows that she’s impacted my life in a huge way, she’s definitely taught me a lot, and I always enjoyed being in class. She’s a role model to her students, and I truly think she’s the perfect example of what Roger Bacon is and what we want it to be.”