The Office of Admissions received some help from a familiar face this winter and spring. Lexy Hoffman ’15 served as an Admissions and Marketing Officer through her co-op program at Cincinnati State College. Lexy joins a small group that have experienced Roger Bacon from multiple lenses; as a daughter of alumni, student, alumnae, coach, and staff member. As she finishes her tenure in the office and for her multiple contributions to the school, it is fitting that she is highlighted as the Face of RB.

The timing of Lexy’s return couldn’t have been better. The Assistant Admission Director, Alyssa Flading ’05 was pregnant with her fist child. Who better to step in for her former coach than Lexy?

Alyssa had this to say about Lexy and her commitment to RB: “Lexy Hoffman is the prime example of what it means to be a Spartan. She is one of the hardest working people I have ever met and puts her heart into everything she does. As a former player in my first year as a varsity coach, I have had the opportunity to see Lexy learn and grow from a player to become a dedicated, accountable and knowledgeable coach. I am happy to say she is not just a coach in my program but a great friend.”

Asked to reflect on her time back at Roger Bacon, this is what Lexy had to say:

Roger Bacon High School is truly a special place and having the opportunity to co-op in the Admissions Office has been extremely rewarding. This school has been a huge part of my family’s life -- many of them went to Roger Bacon. This is the place where my parents met, and it all began. I graduated in 2015 and was a member of the volleyball and softball teams. Both of my sisters are current students -- Haley ’19 and Sammi ’22. But I never imagined that I would have the opportunity to come back in a completely different role.

For the past three years I’ve coached the Girls JV Volleyball team and this past season was extremely special to me and my family. All three of the Hoffman girls were a part of the volleyball program. Haley played on varsity and I coached Sammi on JV. For my parents to see all three of us out there at the same time, especially during a very successful season, is something we will always remember. I don’t think that many people can say that they were a part of the same volleyball program and able to attend school as both of their sisters. To be able to work here for the past 4 months (or so) is also something I will cherish because I was able to see my sisters at school every single day. Haley was even our office-aid. Sometimes, all three of us even drove to school/work together, which made this whole experience more special. Being a couple years older than them, I never had the chance to be at RB at the same time as either one but coming back as a staff member gave me the chance to experience that and it has been extremely enjoyable.

I have learned so much these past 15 weeks. One of the best parts about it were the people that I worked with and the students that I saw every day. That is one of the main reasons why I think Roger Bacon is so special; it is filled with amazing people. At first, it was funny having some of my former teachers being my “co-workers” -- you get to see the school from a whole new perspective. I am extremely thankful that I was able to come back here and learn in a new way other than being a student and look forward to applying the skills that I have learned towards my degree.

Typically, the Face of RB is a narrative in the third person, but I am going to break the rules this time and speak for myself, Brandon Cowans. As the Director of Admissions for ten years, there are students and classes that are memorable and stand out. Lexy and the Class of 2015 are that for me. Their class was extremely close. It is with them that I feel the school hit its stride and began growing enrollment when other schools were struggling. When I was approached about Lexy joining the Admissions Office -- it was a no brainer. I couldn’t have asked for a better person, co-worker and partner to help promote Roger Bacon High School. After working with her the past 15 weeks, I am confident she will be successful in any role.

Lexy is absolutely correct; Roger Bacon High School is truly a special place and it is because of people like her. 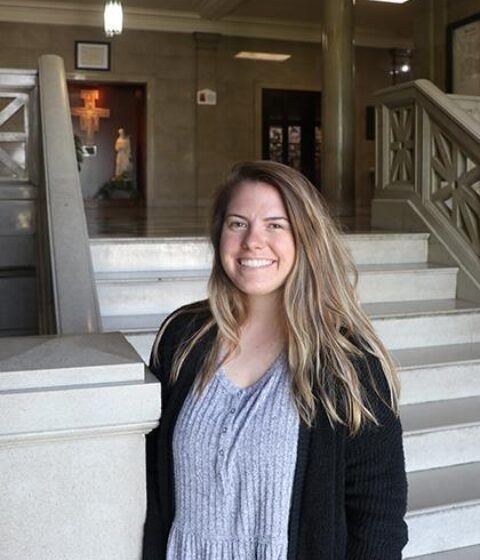 “We are blessed to have such talented and giving alumni and Lexy is a great example of both.”