When deciding the newest Face of RB, it only makes sense to include a face that all Future Spartans will see first thing on their shadow day. Christine Ochs-Naderer is not a new face to RB, but she is a new face to the Admissions Office. Christine has worked at Roger Bacon for the past four years as an English Teacher, the English Department Chair, Yearbook Moderator, Cross Country and Track and Field Coach – she is now venturing into the Admissions Office and headed back to her roots. “I got my Bachelor’s Degree in Public Relations from Xavier University. I then followed up with two Master's Degrees (English and Education). During my time at Xavier, I worked in communications for the Office of Residence Life, which I truly enjoyed. This new opportunity in Admissions will give me the chance to still be in education and continue making a difference with kids but now in a different way.”

As the Assistant Director of Admissions, Christine will work with students from all different grade levels to promote the school, most importantly through the shadowing program. “Since I have mainly taught juniors and seniors, it will be a challenge to get to know so many more students, but it is also an opportunity. Since I started coaching Cross Country, I have expanded the number of students I’ve gotten to know, which is exactly how I will tackle this new challenge.” Christine was named the new Cross Country coach two years ago and inherited a program with a rich tradition but small numbers. “I was so excited to be named the new Cross Country coach. I have coached previously at Summit Country Day, but when given the opportunity to coach here, I jumped at it.” Her first goal was to just get numbers. She encouraged anyone who wanted to run, no matter their background, to create a team with varying levels of ability. The kids showed up – then she encouraged them to bring their friends, which they did. All in all, her first year as the Cross Country coach, Christine had 18 runners for her first season. “I didn’t care where they started, as long as they improved, which they did. Our runners got to know new people, had fun, build confidence in themselves and as a few of them even said ‘it doesn’t matter how slow’ they still did it, which is a huge accomplishment in my book.”

Christine’s kind and hardworking demeanor has fit in well with Roger Bacon’s mission statement of teaching our students in a caring and challenging environment. When asked to pick which Franciscan value was her favorite, Christine chose Compassion. “When I am in a situation where I have to make a choice, one of my mottos is ‘lean on the side of compassion.’ My hope is that even when making a decision where the ‘right choice’ is not clear, I can make the choice that is most compassionate. I see our kids be compassionate every day. Our student body is not like any other school, we are unique, we have students from all walks of life and to see them lean on the side of compassion daily is a reason I am so happy to be at Roger Bacon High School.”

Roger Bacon is made up of many faces, different faces. We hope to showcase as wide a range of our Spartans as possible. If you would like to nominate a Spartan, past or present, to be featured as a Face of RB please click here. 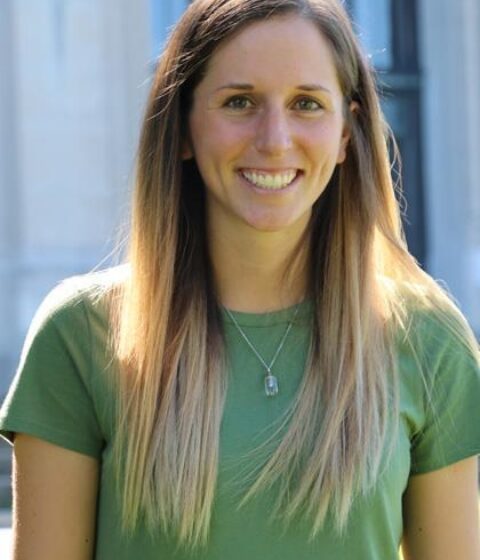 “I am looking forward to working closely with Christine to promote the great things happening on campus. Her previous experiences at Xavier University and as a teacher at Roger Bacon, bring a unique perspective and skill set that will help continue our success in the Admissions Office.”